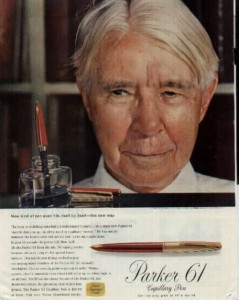 Could it be that this 1957 Parker ad featuring Carl Sandburg was the last time a living poet was paid to endorse a pen?

When was the last time you saw a poet getting the opportunity to endorse any luxury item?

This Parker ad from 1957 might be it. The legendary Carl Sandburg eyes a brand new Parker 61 and its mess-free filling mechanism in this classic ad.

You would think modern pen makers would be hitting poetry slams across America looking for popular writers to promote the use of their pens. You, unfortunately, are a logical person. We don’t even see best-selling authors getting endorsement deals for pens, computers or anything.

How did the people who famously use these tools the most get left out of the conversation. One would think that any brand of pen or laptop Stephen King, Nora Roberts or J.K. Rowling chose to promote would sell off the shelves.

Tell us: Aside from the Mont Blanc writer series (those writers are dead and have no say), when was the last time you saw a living poet…or any writer in a pen ad?