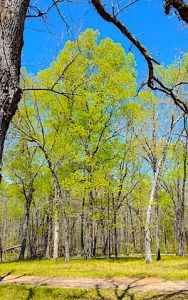 I love that fresh, brilliant light green of new leaves after a long winter. These are white oaks from northern Georgia in full bloom.

I got my motor running and headed out on the highway for another spectacular trip down to Atlanta for a great pen show. Maybe it was due to the fact Chicago had a couple of inches of snow on the Monday before the Atlanta show, Georgia just looked stunning to me when I made my way to the final destination.

It is a long drive, so I broke it up with a stay in Chattanooga, TN. In the morning I crossed the border into Georgia to check out the National Park for the battlefield at Chickamauga. During the Civil War, this was a staging battle setting up Sherman’s infamous march to the sea. Union General William Rosecrans was pushing into Georgia from the stronghold of Chattanooga. Confederate General Braxton Bragg had the job of sending them back north. 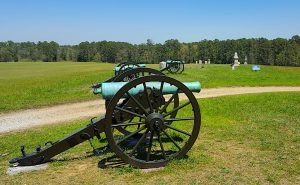 These cannon represent where the Union artillery was set up behind Gen. Thomas’ infantry, as the general prevented a complete rout of the Federal troops.

Bragg was successful for the first 2 days of the battle. A communications error by Rosecrans and his generals turned day three into a rout of the Union Army. As Bragg moved to completely decimate the Union threat to Georgia and the Deep South, a Union general named George Thomas stepped up and held back the onslaught. Buying time for the Union to flee the field, Thomas stoutly held off the Confederacy until the Union army successfully left the field. It was truly a victory for the Confederacy, but instead of wiping out the Union army in its entirety, as it had the chance, they were prevented from doing more damage. Gen. Thomas would be forever remembered as “The Rock of Chickamauga.” 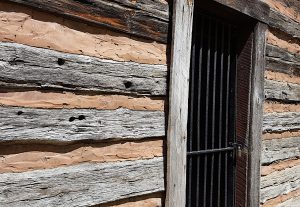 This log cabin was a one-room home that was converted into a field hospital during the battle of Chickamauga. Check out the bullet holes still in its timbers.

It is impressive how well the battlefield is preserved. It is likewise impressive that the original road that separated the two sides during the battle remains in active service today! The road has been paved and widened to accommodate 2 lanes of traffic, but it is exactly where it was more than 150 years ago. I was duly impressed with a log cabin that was converted into a field hospital during the battle, as it has been fully restored and remains standing. You can still count the bullet holes in its aging timbers. 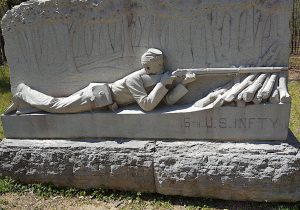 This granite statue of a Union infantryman was one of my favorites depicted in my favorite Civil War book as a child.

Battlefields have many memorials dedicated to the men and units that fought and died, and Chickamauga is no exception. When I was a little kid, only 7 years old, first reading about the Civil War, one of my favorite statues was of an infantryman from the Union laying prone and taking aim at the Rebs. It was in my dad’s big book blue cloth-covered book about the Civil War. I hadn’t thought about it for years and was pleasantly surprised to see it in real life, after I turned a bend in the driving tour. Unfortunately, my granite friend has suffered the loss of his nose, cap bill and rifle hammer over the years.

Okay. On to the Atlanta Pen Show. Jimmy, Suzanne and the gang have done a great job building this show. Plus, they have that show running like clock work. Three rooms and a hallway are packed with vendors, and the remaining room was packed with users and collectors. 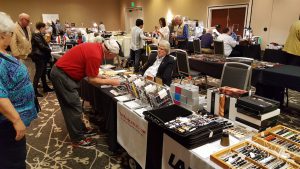 With a steady stream of people visiting the 2018 Atlanta Pen Show, I barely had time to snap this shot my table and the room. The legendary Rick Horne was my neighbor for this show.

It also is one of the friendliest shows I attend every year. Everybody comes to learn, test, explore and have fun. Unlike most shows, it feels as if the generations blend seamlessly in the bar after the show shuts down for the day. You have at least 100 people talking, sharing pens, checking out one another’s inks and trading notes about what to buy or try. Younger collectors seek advice and expertise about vintage and luxury pens from veteran collectors and vendors, while those same veteran pen folks ask after the latest modern pens and inks the newer collectors are enjoying. It is really encouraging to see.

On Saturday night after the show, I ran to the Georgia Aquarium for an opportunity to bliss out with the monstrous indoor coral reefs! The main tank was my favorite as it was a 6,300,000-gallon salt water tank big enough to host 3 whale sharks, 5 manta, dozens of reef sharks and stingrays and thousands of fish. It was the next best thing to S.C.U.B.A diving. I loved being that close to the sharks and looking in their eyes and mouths. Be sure to visit if you ever get the chance.