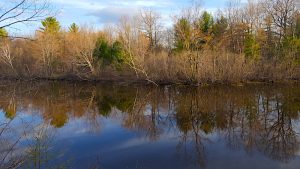 Nope, again this has nothing to do with the story, but it is a beautiful swampy nature preserve in Wisconsin.

Mrs. Peebles loved her first-grade class. Each of her 20 students was a clever little sponge soaking in knowledge, exploring and learning in their own ways. High-energy and mostly adorable, she wished she could protect each one from all of the dangers in the world.

To help keep them safe, near the end of the school year, she’d have a special class to warn them about the dangers lurking within their own homes. She explained how bleach and ammonia could be wonderful cleaners for their homes, but they could also be deadly poisons if drunk. Just getting the chemicals on their skin could hurt them, if they didn’t wash them off quickly. She let the kids come up and give a quick little sniff of each chemical to make sure they knew what they smelled like and should avoid.

Next she warned them of other dangers, such as hot stoves and space heaters.

She would wrap up the discussion with a dire warning never to stick anything other than an electric plug into a light socket. Electricity was vital to powering their lights, TV and computers, but it also was deadly when touched directly. She explained how a shock could stop their hearts or burn them.

After answering the children’s questions and reassuring them that all of these dangerous things could be very safe if only used properly, she began to put away her sample chemicals in a locking cabinet behind her desk.

At the very second she knelt down, there was a loud pop in the classroom and the lights flickered.

She stood up and screamed when she saw little Johnny Whozit lying unconscious next to an electric outlet on the other side of the room, a small pair of scissors clenched in his hand.

It is easy for us, as adults, to see that Johnny had a severe lapse in judgement when he was just told that the very thing he was about to do could kill him. The vast majority of us don’t need to stick things in an outlet to know it is an insanely terrible idea. The overwhelming majority of us have never stuck anything other than proper plugs in an outlet.

While quarantine totally blows goats, for the life of me I cannot understand why grown adults think it is suddenly a good idea to drink bleach, break quarantine and stop wearing masks in public, in close proximity to other people.

With increasing repetition, I’m hearing all manner of virus conspiracy theories, as if Covid-19 has ideological intentions.

It doesn’t. The virus isn’t liberal, conservative or even political. It is a mindless microscopic thing that isn’t even a complete single-cell structure that scientists define as only being on the “edge of life.” It isn’t living in the traditional sense that we understand living to be…but it isn’t quite not-alive, either. No wonder it is difficult to treat. It only has two goals: quasi-live & replicate. It sickens and kills everybody equally, regardless of politics, race, religion or wealth.

I am blessed to count many EMTs, nurses, doctors and police officers among my friends and customers. Many of them have told me how insanely contagious this disease is. Most of them have seen people die of the disease…many people, in some cases.

Many of the best scientific minds in the country are working on cures and vaccines to save the rest of us from this plague. At the moment, we have no known, proven cure. We’re mostly keeping our fingers crossed that it doesn’t kill us. True, for as many people who get it, only a small percentage of them die. Who wants to take that risk when a cure or vaccine might be just around the corner?

Yes, the economy is in rough shape. Absolutely, people need money to continue on. All of us would love to gather with friends and family once again. We all want life to return to normal as soon as possible…and I hope with as little suffering and death as possible. OMG! Warm weather and a beautiful springtime make it even harder to stay indoors. I get it.

But these are extraordinary times, and they call for extreme measures to protect our family, friends and neighbors as much as humanly possible.

One of the most dangerous parts about Covid-19 is that you can get it and never know it. You can also get it and spread it for up to 14 days before coming down with symptoms. Why put yourself at risk? Why put your family and friends at risk? Why pass it on to some friendly elderly person you accidentally bump into at the grocery store? Who knows how many people someone you might infect can then turn around and infect?

Until we have a cure or vaccine, the only thing we can do for ourselves and everyone else is stay home…and wear a mask if you have to go out for supplies. It totally sucks, but it is the only way to stay safe…minimize the spread of the disease…and buy the many doctors and scientists working around the clock to find a better way to kill, cure and prevent this disease a little more time.

Regardless of politics, for the health and lives of our families and friends, we need to unite as a nation and a planet. At no other time in human history has it been easier to be a hero that helps save humanity. All you have to do is continue to shelter in place.