For all of our pen customers around the world who live south of what we, in the United States, call the Mason-Dixon Line, odds are you might not know the true joy of a “Snow Day.” 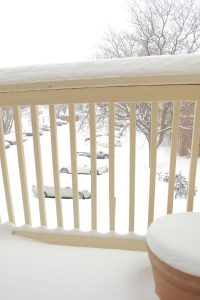 As of sunrise, 5 of the expected 12 inches of today’s snow storm have fallen here in Chicago. It is a “snow day” and time to frolic in the white stuff.

A snow day is a day where schools get closed because there is too much snow for the buses to drive the kids to class. When I was a kid in the 1980s, the entire kid world revolved around the random joy of a “day off” to now play in tons of snow. We could generally count on a good 3 or 4 snow days every year in Chicago. These days we can go two or three years between quality snow days like back then. In fact, earlier this week, one of my young fencing students was aware of snow days but was curious what triggered one, as he hadn’t seen more than an inch or two of snow at a time in quite some time.

Me, I’m an autumn-winter kind of guy. I hate summer’s high heat and humidity. I burn so quickly under the sun that I wear more layers in summer than winter. I love snow days! True snow days that pile up a foot of snow or more.

Why? It is a day for shoveling, building snow forts, having snowball fights and hot chocolate. The cold weather on a snow day really isn’t that cold, as you can’t get good snow below 20 degrees Fahrenheit, around -5 Celsius. It is bracing to be outside, and it is invigorating. To be out in the elements, even with a thankless task like shoveling, it grounds you in the moment and it makes you feel at one with the elements and nature.

Indoors it is a great time to write! I don’t say that cynically as a pen shop owner. I have beenÂ a writer as far back as I canÂ remember. Letters, stories, books, journal entires…doesn’t matter. If you don’t have to go to work or school on a snow day, it is a free day for anyone who loves writing to catch up and focus on their wordsmithing. It is a day to take a soothing moment or two to fill some of your favorite pens with ink and see if you can write them dry.

My favorite snow day was back in the mid- to late 1980s. We had something like 18 inches of snow overnight and into the day. It was a blizzard with really high winds and wet heavy snow. Nobody was going anywhere that day. The power was knocked out, and somehow our furnace was affected by that and blew out, too. We bundled up and shuttered as much of the upstairs as we could to insulate against the elements. (Remember, there was no such thing as cellphone weather aps to let us know when the storm would end.) We had a battery operated radio for updates, but we didn’t run it often to prevent the batteries from dying.

My mom, sister and I “played” frontier family for most of the day. We lit candles and did some long-term homework projects as the storm ravaged its worst. We drank Ovaltine, ate Campbell’s Tomato Soup and I also had a peanut butter and mustard sandwich, I’m sure, as they have always been a staple of my diet. We imagined this was how Abraham Lincoln lived as a kid…except we had Ovaltine, Campbell’s Soup and peanut butter. Annnnd, nobody died as a result of the storm or got a fatal disease. But, damn it, we were doing schoolwork by candlelight. That had to count for something.

Unable to stay cooped up all day, we finally ventured into the weakening storm in the afternoon. We helped Mom shovel, then we played for a good hour or two with our neighbors, building the requisite snow forts, snow tunnels and a snowman, having an absolute blast. By the time we started getting really cold and our clothes had soaked through with melted snow from our playing, the power had come back on and life returned to normal.

It was one of my favorite days of childhood, and, if you live somewhere in today’s storm path, I hope you have a snow day that is just as good!