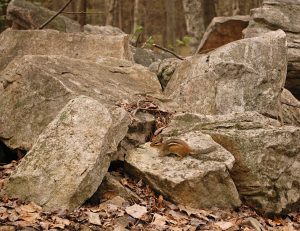 This is a chipmunk, not a squirrel, but it is still cute.

Leo Ledbetter started his day like any other since his wife, Miriam’s, passing last summer. He’d shower, have a little breakfast and then dress in his suit and tie. From there, he’d take a train and then two buses to get to the cemetery where his beloved was buried…and hour and a half trip.

He’d spend an hour or more seated on a bench beside her grave, talking and recalling their golden memories. Over time, he noticed a little squirrel hanging around the area. So the next day, he brought some peanuts to feed the squirrel.

This went on for months, rain or shine, blistering heat or icy winter days. It got so the squirrel would eat right out of his hand.

Then came the pandemic. Leo paid it no attention. He figured if he died, he’d die…and maybe then be reunited with Miriam.

And as expected, he caught the virus and he died.

The little squirrel missed his visits until one day another squirrel appeared in the cemetery and from the first moment, they got on terrifically and stay together for the rest of their days.