The God-like Surgeon
By Art Cerf 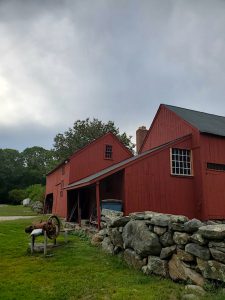 Here’s a photo of a barn before a rainstorm. It has nothing to do with the story. We just like to show off some photography.

The doctor never considered himself superior, just that everyone else were underlings. When he’d arrive at the hospital, doctors, nurses, administrators and custodians all would step aside and say, “Good morning, Doctor.” Â To a special few, he acknowledge them with a slight nod. The rest would received a “Hmmm.”

Imagine his surprise when he tested positive for the corona virus. And his shock when he was rushed to the ER when he had trouble breathing. Soon, he was in intensive care on a ventilator. The next days he was in and out of consciousness, seeing only doctors and nurses in hazmat suits.

One evening, about a week later, he woke up in the middle of the night and saw a man in the shadows, sitting beside him.

“Ah, you woke up,” the man said, and then carried on a one-way conversation about the news, the Cubs, the latest Hollywood marriage or divorce. Normally, Dr. Vandergriff had no time for such nonsense but there was something about the man…his voice. Only the doctor couldn’t place it as he drifted back to sleep.

“Pete,” the doctor thought, Pete the garage man. Then he remembered how years ago, Pete’s 6-year-old daughter was dying of congenital heart disease. The doctors said there was only a 20% chance she’d survive an operation but no chance at all without one. Â That’s when Dr. Vandergriff was called in. It was a grueling surgery but when it was over, the little girl survived and later grew into adulthood.

Pete, whatever his last name was, was eternally grateful and always made sure the doctor’s car was parked near the exit of the parking garage, alway in two spaces so it would’t get dinged or scratched by other drivers. He also washed the car once a week and saw to its polishing.

But Pete had retired, what, five-six years ago? And his personal service at the garage left with him.

Yet, here he was, keeping the doc company, night after night.

Finally, doctors removed Dr. Vandergriff’s ventilator tube, and he rested a few more days before being sent home to recuperate.

It would be three months before he was able to return to the hospital to work but when he did, he went straight to the personnel office. He asked Mildred Foster the name of the garage super named Pete who used to work at the hospital. Mildred had to be 75 but she remembered almost everyone who ever worked there.

“You’re thinking of Pete Porcelli,” she said. “Let’s see,” she said, pulling up his records. “He retired from here in November of 2015.”

“Do you have a home address for him,” the doctor asked.

Mildred paused for a moment. “I’m sorry, Doctor, but Pete passed away two years ago.”