Sometimes the biggest part of an adventure is just arriving safely. My trusty car, Penelope Apocalypse, was debating existential issues with herself, as her starter was giving out. A quick trip to the dealership the day I was scheduled to drive south turned into a prolonged exploration of the starter system. After 5 hours of delay, the dealership determined that her starter was dying and it had no spares to replace it. Thus, I hit the road with no guarantee of getting to Dallas…but I really wanted to go! 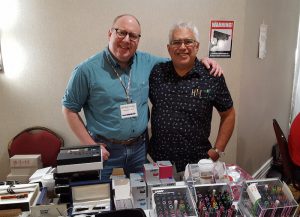 In one of our few sober moments, Three-Finger Frank and I visit at my table during the Dallas Pen Show.

Stopping only for gas near St. Louis, I made it to Muskogee, Oklahoma, by 4 a.m. the following day. Penelope graced me with a fresh start in the morning, and we made it to Dallas on a wing and an exhausted prayer.

Thank goodness for great friends. The awesome pen dealer Joe Lowe was waiting for me in Dallas, and he found a dealership just a mile from the pen show hotel! I unloaded Penelope at the hotel, and we took her to the dealer for a new starter.Â One classic Luby’s dinner experience later, Joe and I were fortified for the show starting the next morning.

Pete Kirby and Mike Walker did a fantastic job advertising the daylights out of the Dallas Pen Show this year. It was packed nearly shoulder to shoulder all day Friday and Saturday! They sure run a good show.

I was on the back wall, where I was last year and stacked more than 4 boxes worth of goods on a single table. It is a great location, and I was visited by tons of friends all day Friday and Saturday. Charles S. and his buddy Murray came to visit from Ft. Worth. We had fun shootin’ the breeze. Then came Three-Finger Frank and his lovely wife Kelly. We’d eventually get a great dinner together, catching up on a year’s worth of conversation and puns.

The show was so busy, I barely got a chance to see any other tables other than the ones next to me. It looked like a vintage heavy show, and from what I could see there were some really amazing offerings. The oversized orange hard rubber Watermans with sterling silver filigree had me drooling the most.

Friday night ran late. After dinner, Frank and I continued on in the hotel bar, joking and swapping philosophical musings. We were soon joined by Nik Pang, and the laughs and bull session continued. It was like being in college all over again. I’m surprised our livers didn’t explode.

Saturday started way too early, but it was another fun day of friends and pens. My favorite new friend is Miss Targa Slim. Mysterious, beautiful and hilarious. We met the day before and had a delightful time swapping stories for a second day. She said she’d keep in touch, and I sure hope she does.

Saturday night the pressure was off, knowing I’d have a starter that worked. Another dinner at Luby’s with Joe and a few other friends, and then it was off to Muskogee. The long ride home was way more relaxing and uneventful. Although Penelope seems like a new car to me, she crossed the great 100,000-mile mark somewhere in Oklahoma! She’s the first car I ever drove 100,000 miles on, and she feels powerful enough to go another 100k…now that she has a new starter for the task.