We hate bragging so much we started a blog. Just be forewarned.

Although we try not to get too crazy about any one pen on our site, we think this one is worth all of the hype. It is an original, museum quality Mabie Todd Eternal fountain pen. More than that, this is our senior size or oversized edition.

The hard rubber body is practically perfect, as its orange and black design is immaculate. The imprint is a little faded in one spot but is otherwise strong. The trim is great with only a little brassing on the ball of the clip.

Oh, and the nib. The nib is spectacular. It is a 14k gold dream that writes a smooth medium line. This vintage fountain pen has been refurbished with a new ink sac. So you can use this pen or brag about it on display. 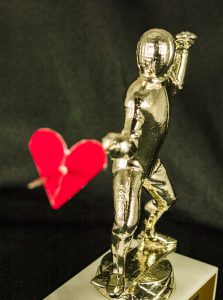 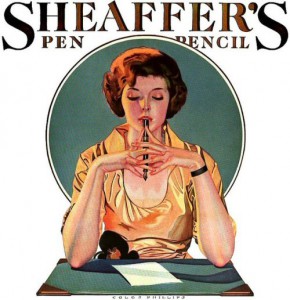 The key to every good love letter is making it as personal as you can. Don’t be intimidated by writing. Savor the joy it will bring.

Okay, so now that you have a spiffy pen for writing love letters, how do you go about using it?

Writing a good love letter is an art form, but it is not one you need to be intimidated by. There is no one correct way to write one, as every relationship is different and in different stages.

As with any writing project, you must keep only two simple things in mind: 1.) Who is your audience & 2.) What is your objective.

The letter better not sound that cold, but it helps to take the edge off when you sit down to compose.

You are never too old or too young to write a good love letter. My first one was to a teacher’s aid in first grade. I was madly in love with Miss Mix. Perhaps, that’s where my flame for older women first got lit. I was 6. She was 21. She was pretty and kind and totally understood my inner soul way better than those immature girls my own age. It was ill fated, but I totally got a love letter back from her. She declined my proposal to marry, but she did encourage me to look her up after I grew up. Sadly, she moved away when her student teaching ended that semester and we lost track of one another. C’est la vie. That’s just the way love goes sometimes.

Let’s say you are just getting to know someone or want to get to know someone. Be your quirky self, humorous and sincere. Don’t overdo it. A light touch is best. Include something about the connection you share.

“Every day it seems I spy you through the sneeze guard of our office cafeteria salad bar. Who is this amazingly hot woman with three and a half noses and 7 dancing arctic blue eyes peering back at me through the plexiglass refraction? I don’t know, but it seems we agree that croutons are the best part of any salad. Is this kismet or just a mutual fondness for crunchy salted carbs? I don’t know, but I’d like to find out. How about stepping out from behind the sneeze guard and joining me for a real lunch some time? Potentially yours, _____”

Nothing elaborate. It’s light hearted, flirty and fun without sounding stalkerish or dripping in innuendo. Yet, it leaves open many possibilities.

If you are already in a relationship, understand the difference between intimacy and lust. Both make for fantastic love letters, but it also is the point at which you really need to focus on shared experiences and end goals. Intimacy can lead to lust, but it is that special souls-laid-bare closeness that comes from shareing your lives. Use those close personal experiences to tell your lover why they are so important to you. Put your feelings and your self out there and make sure they know how incredible it is to have them in your life.

If a night of unbridled passion is what you are after, then tap into lust, and use your love letter as foreplay. Get it delivered midday at their home or office with flowers or a gift. Use your words to stir their desire.

THE BIGGEST MISTAKES GUYS MAKE: Unless you met your partner at a renaissance fair, lay off the knightly talk and overtly ardent courting of the 14th century. Methinks it goeth too far, and most fair maidens have second thoughts about a man who pretends he’s living in the realm of “Dungeons & Dragons.”

ALSO: Lay off the lust angle, unless your relationship has already crossed that line or is on the verge of crossing that line. Otherwise, most women will resent being objectified. Mostly, they’ll think you are creepy and/or scary. If it is meant to be, it’ll happen. Be patient.

THE BIGGEST MISTAKES GALS MAKE: Don’t put the proverbial cart before the horse. Guys love love letters, too, but you want to be careful about going too far ahead of where the relationship is really at. If your relationship is still pretty new, you might spook him if you start talking about marriage or seeing your yet unconcieved children in his eyes. It might be obvious that the two of you will be headed down the aisle one day, but don’t spring it on him out of the blue.

ALSO: If you want a more physical relationship, don’t be afraid to ask for it. We live in messed up times. If you’ve got a nice, caring guy who is a little reluctant to go too far at first, it doesn’t necessarily mean he doesn’t want you. He was likely raised to respect women and not treat them like sexual play toys who can be easily discarded. Mix that with a lifetime of news reports about rape and sex abuse against women, and he likely doesn’t want to be seen as a predator. A gentleman doesn’t take a lady; she gives herself to him. He likely desperately wants your permission to do all of the things you desperately want him to do. Don’t be afraid to write it out in black and white for him. 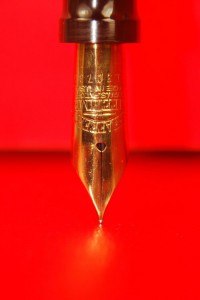 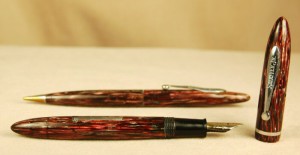