After last year’s chaotic but successful pen show, we are hitting the road for the 2018 DC Pen Super Show!

We’ve spent the past month cleaning, polishing and organizing more than 300 vintage and modern pre-owned luxury pens not yet online for this show. This photo shows only a tiny fraction of what we will have available. 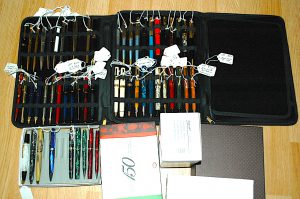 This is just a tiny fraction of the more than 300 vintage and pre-owned modern pens not currently on our website that we shall carry on our table at the DC Pen Show this weekend.

Omas, Delta, S.T. Dupont, Namiki, Montegrappa and rare Pelikans will make a splash. Plus, we’ve loaded up on Montblanc from the 1970s and ’80s. In addition to that we’ve been adding a dozen ultra-rare Esterbrook pens, rare vintage Waterman pens and many great vintage Parker and Sheaffer fountain pens.

Naturally, we are returning with our Lamy nib testing station that was a huge hit last year. It will be loaded with this year’s limited edition Safari and Al-Star designs, as well as many great traditional colors. We’ve restocked Lamy ink, too!

We will have something for everyone. With a total of more than 600 pens in every price range on our table, if you can’t find a new treasure to love…you just don’t like pens.

I went a little ink crazy at Vanness Pens during the Little Rock Pen Show, back in April. Afterall, they only have the world’s largest selection of ink…and they were kind enough to ply just about all of the vendors and weekend pass holders with free food (including chocolate-covered bacon) and beer. As such, I dove further down the Diamine rabbit hole…and then I won a free bottle of ColorVerse Kepler’s Laws ink in a raffle!

These are before and after samples of Diamine and ColorVerse inks left in the sun for 3 months.

Now it is time to share my experiences with the inks. My all-time favorite blue ink is the old Waterman’s Florida Blue, so I had to try some of Diamine’s Florida Blue. Diamine Florida Blue is a very pale blue that is just a little too deep to be turquoise. I still prefer the much darker Waterman version. I put a test sample in a sunny window, and the UV rays completely erased the Diamine Florida Blue test sample! Definitely not archival quality ink, although it is attractive for artistic writing uses.

Diamine Mediterranean Blue ink is gorgeous when used in a really wet pen. The photo proof sample isn’t as generous of its deeper hues of blue. It could be my replacement for Waterman’s discontinued ink…except it too was completely erased by the sun!

My favorite ink find of the past year or two was Diamine’s Ancient Copper. When I saw the Diamine Autumn Oak at the shop, it looks about a shade lighter in a rich orangy brown. It is a beautiful ink when fresh. Annnnd, luckily it holds up a little better than Diamine blues in 3 months of sunlight.

Of the four inks, ColorVerse’s Kepler’s Laws held up best to the sun. It is a rich red color with purple hues and a little shimmer when fresh. (I don’t see the shimmer, but all of my pen pals insist that they see it.) It writes better than I thought it would. I was really worried it would clog up my pen, but I didn’t have that experience in a Delta Fusion A2 I have with a stub nib. After 3 months in the sun, the more vibrant red aspects vanished, but a slightly watery merlot color remained strong.

And for those who are curious about the black header ink, it is the already tested and proven Aurora black. A bad-ass ink that never quits.

Since last writing, I’ve been to the inaugural St. Louis Pen Show, moved secret underground workshop lairs and hosted visits by many members of my college fencing team! 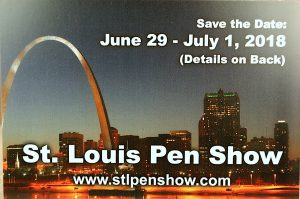 The first St. Louis Pen Show was a monster success and a ton of fun.

First to the exciting and wonderful new St. Louis Pen Show. More organized than several already established pen shows, Anne and her crew have spent 2 years advertising and promoting this incredible show. Many of us vendors were worried no one would attend, aside from vendors. But no! A city’s worth of people who had never previously attended a pen show filled the venue for 3 days!

The trip down was uneventful…until we almost got run off the road by a tornado! About 2 miles from the venue, a huge cell of storm clouds began blowing across the interstate. Wind was howling debris across the highway, even bowing flag poles. A native-born Midwesterner, I didn’t worry until the clouds turned green and sirens started going off. Talk about bad times to be stuck in rush hour traffic.

Luckily, I only got rained on. No funnel cloud formed near me to whisk me away to Oz.

Many of the vendors were regulars on the show circuit, and we were all excited to catch up and discuss the past month or two since we’d last met. During the days of the show, nearly everyone who came to my table gushed about attending their first show. And most of the folks were 40 and younger! Heck. We even had a lot of kids collecting their first fountain pens. It was super encouraging to see.

Unfortunately, it wasn’t all fun and games. After a very nice auction on Friday, one of our longtime friends passed away. John F. and his wife were among the first to welcome me into the pen show scene after a particularly bruising first or second Chicago Pen Show for me about a decade ago. John was a retired newspaper editor, and I was freshly out of newspaper work in an era that has seen the decimation of newspapers across the country. We commiserated and bonded over our journalistic past. We’ve talked at nearly every pen show since. This night was no different, as he recounted his recovery from a rather severe stroke a few months earlier. Little did either of us realize our conversation just before the auction would be our last. All of the vendors were upset to hear of his passing just as the show opened for Saturday.

Among the things this show got so right was the ceaseless promotion that included heavy media promotion to reach out to new showgoers. Plus, they had cell phone aps to help people navigate the show! AND, they had a break room for the vendors that was loaded with soda, sandwiches and snacks! Like other shows they had table watchers, a great bar scene for after-hours meetings and catching up, loads of free parking and a very nice hotel. 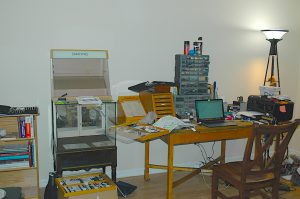 Here’s a quick peek at our new workshop as it comes together for many more great vintage pen repairs.

Soooo, in other news, we’ve moved! Well, we still have the same P.O. Box and Website, but the secret underground workshop is now much larger and better suited to fix all of your favorite vintage pens. We’re not 100% unpacked but close, as you can see from this top secret photo.

This will be a temporary home, hopefully, for only a year or two. Because after this, we want to buy our forever, permanent home.

And while all that transpired, I had three lovely visits from Blue-Hair Cathy, Chewbacca and The Chihuahua. All teammates from my college fencing team…an unspecified number of years ago. All arrived separately on different days. Two from Montana and one from Antarctica! It was great to catch up on all of our current lives, while reminiscing about all of the people we impaled together.