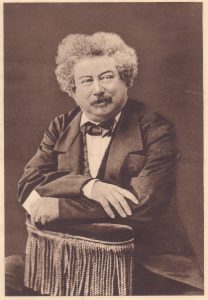 Alexandre Dumas wrote some of the greatest novels in history. It is difficult not to love “The Three Musketeers,” “The Count of Monte Cristo” and “The Man in the Iron Mask.”

Alexandre Dumas is my favorite writer of the 19th century. Nobody comes close to his adventures, characters or ability to capture the human condition. If you spend any time with his most famous novels, all of his characters are easily recognizable as people you can identify with in modern times. That is the secret sauce that elevates his writingÂ to a timeless status.

My love of his work started at the age of 13. I picked up “The Count of Monte Cristo” on a bit of a whim. Before I knew it, I was hooked. It was pure literary crack. In spite of its length, I could not put it down. The tragic tale of Edmond Dantes and his need for vengeance is still rivetting. I teach fencing classes to junior high and high school students. Every 4 years or so, as new batches of kids rotate into class, I give them an end-of-the-year gift of a copy, and those who read it…even the 12-year-old girls…all come back grateful for a read that rocks their world as much as any Harry Potter or “Hunger Games” novel. (The highest praise of youth today.)

And honestly, Dumas only gets better with age! If you only read his works as a youth, you NEED to revisit them. Since turning 30 more than a decade ago, I’ve made a concious effort to reread at least one of his novels every year. There is soooo much more depth and realism that I missed my first time through as a teenager. 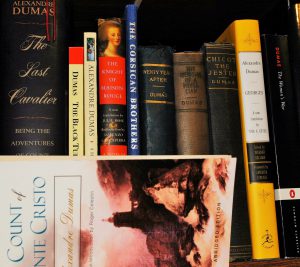 Here’s a small selection of my books by Alexandre Dumas featuring early translations and modern reprintings.

“The Three Musketeers” take on an almost cartoonish quality in our modern pop culture, but to revisit them, you find a complicated story of love, sex, loyalty, honor, war and true friendship. The musketeers are ordinary men in extra-ordinary circumstances. Clever, hard working, mostly honest (you really can’t trust Aramis much), these are 4 fellows who know how to game the system and make the most of the life of warriors. Dumas first wrote the novel as a serial in newspapers in 1844. It took Paris, and then the world, by storm. He actually followed it up with 4 more books: “Twenty Years After,” “The Vicomte de Bragellone,” “Louise de la Valliere” and “The Man in the Iron Mask.” The last one is my absolute favorite, and its symbolic significance–no spoilers, I promise–completely held me in its grasp. Not only did it fully reveal the truths of all the main characters to me, it really helped me to make better sense of the world around me at the time I first read it. Pretty impressive for a novel that came out 170 years ago in 1847.

A new book of the Musketeer series called “The Red Sphinx” was just rediscovered. It was in serialization when Dumas died in 1870! Technically, it doesn’t have an end, but some of his notes divulge how it was to end. Although I have yet to read it, it is supposed to take place about 20 days after the original “The Three Musketeers” novel ended.

More than this, Dumas wrote 300 books! He also wrote many plays, newspaper, magazine and fictional short stories. Another of his most famous stories is “The Corsican Brothers.” Here nobel twins, who were separated at birth, can feel each other’s nervous systems and emotions from across great distances…eventually learning of their parents tragic murder and uniting to extract revenge.

I own and have read dozens of his lesser known works. Most of them are as good as his biggest hits. The real trick is finding good translations! For me, the tranlator helps to be from the late 19th century or early 20th century. They try to capture the English language of the time period in which Dumas was writing. This builds a rhythm and poetry that Dumas conveyed in the original French. Modern translations fail for me because they try too hard to make it sound like modern, American English language and times. It destroys the cadence of the language and the romance of the 1800s, as well as the eras in which Dumas was writing about. 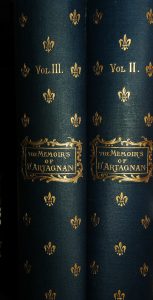 These are 2 of three volumes that I own of the original source material of “The Three Musketeers.” These are “The Memoirs of D’Artagnan” in an early 20th century translation!

How big a junkie am I? I found an early 20th century translation of the 3-volume biography of the actual 4th musketeer D’Artagnan! I have yet to read it, but I can’t wait. It supposedly gave Dumas the inspiration for writing the adventures of the musketeers in his fictional masterpieces.

Dumas also was a fascinating man, even without his incredible skill as a writer. He was a biracial man born of a white mother and black father in 1802. His father was one of Napoleon’s top generals…until they had a falling out during the Egypt campaign. (Any number of historians thought that Napoleon’s not listening to Gen. Dumas was one of his greater blunders in Egypt.) Although his father died in exile, young Alex got to encounter Napoleon as Napoleon changed horses while beating a hasty retreat from Waterloo.

Alexandre started writing as a young man, primarily for the stage. His early plays were often political and controversial. (France was undergoing several revolutions during his lifetime.) He didn’t really find success until he wrote a play about Henri III. Historical fiction was practically his invention. (Shakespeare mastered it on the stage, but Dumas really developed it into an art form in novels.) With great success, came great loves and travel adventures of his own. Ultimately, no matter how much money he made, he spent far more. He died heavily in debt and fairly poor. 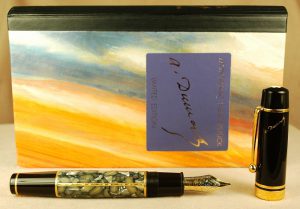 This is a 1996 Mont Blanc Writers Series Alexandre Dumas fountain pen with the wrong signature on the cap and box.

Mont Blanc wisely chose to honor him in 1996 with one of its early limited edition writers series pens. The pen was handsomely trimmed in classical French style accents, such as aÂ fleur de lis on its nib. Collectors especially love this pen because it features a significant mistake on the part of Mont Blanc. The company’s early releases of the pen featured not Alexandre’s signature but the signature of his son, Alexandre Dumas fils, who famously wrote “Camille.” The company scrambled to recall these pens and replace them with the right signature. As such, the wrong signature pens are worth more than most of the other writers series pens. 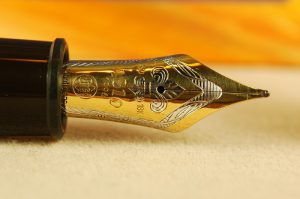