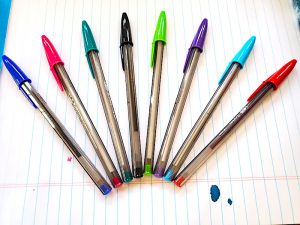 During my last visit with Ink-Fast Donn at the D.C. Pen Show in 2019, he said he was starting to test ballpoint inks to see how well they hold up to UV light.

Last summer, I discovered a collection of the famous and commonly used Bic Cristal ballpoints in my fencing gear. I taught a wonderful group of teens and tweens advanced competition maneuvers and strategy, and to help them remember their lessons and opponents, I insisted they keep “Diaries of Doom” and “Tomes of Terror.” To help personalize it more, I handed out colorful notebooks and pens.

Armed with 8 colors (blue, pink, green, grass-stain green, black, turquoise, purple and red), I created a sample on Rhodia paper and taped it to a sunny window of my home at the end of August. I took it down at the end of February and was surprised by the results.

This photo doesn’t really do full justice to the sample set and proof set. The blue doesn’t look as blue as it does in real life.

Surprise #1 to me was that the black ink faded. With fountain pen inks, you can generally count on black to be the most stable and fade-proof. While it didn’t fade away entirely, it had issues. 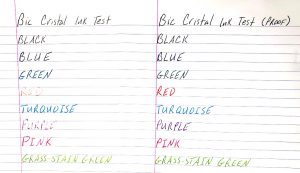 Side by side comparisons showcase the effect of 6 months of sunlight on Bic Cristal inks.

Surprise #2: Blue! Blue fountain pen inks fade something fierce under the withering sun. Bic Cristal blue got stronger! It lost some of its blueness and turned blacker, but it held on defiantly under the sun’s gaze.

Surprise #3: Grass-Stain Green didn’t fade as much as I thought it would. It faded a little.

Red and purple faded the most. Green, turquoise and pink faded a little, but survived okay.

Reflecting on this experiment, for some reason, I always assumed oil-based ballpoint inks would be far more permanent than water-based fountain pen inks. Yet, their chemical compositions all have their frailties. Some ballpoint colors react differently than fountain pen inks, but that shouldn’t surprise me as much as it did. 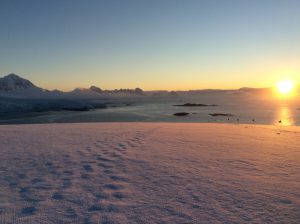 Click this photo for one of the most beautiful images of a sunrise you’ve ever seen: a sunrise over Antarctica by Nandi Kovats.

Time and again I talk about how blessed I am to know so many interesting people. Today I want to introduce you to my old friend Nandi Kovats, an Antarctic adventurer and pen maker…among many other things.

After returning from Antarctica several years ago, he dove head first into an obsession with pens, which culminated in him learning the art of how to make them…while back on station in Antarctica. But, perhaps I’m getting ahead of myself.

Nandi and I first met on the University of Montana fencing team. Go Griz! Nandi was one of the most gifted fencers I had trained. He learned faster than anybody I know, and he was hyperkinetic. He was always moving and, better yet, he could instantly synthesize new information and put it into physical action. 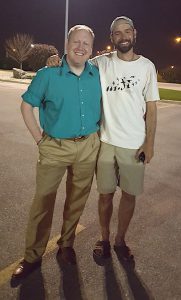 Nandi stopping by for a visit after work several years ago just outside Chicago.

I’ll never forget a tournament in Spokane, Wa., where Nandi was in a direct elimination round foil bout. He was getting eaten alive by a more advanced and experienced fencer. During a one-minute rest break, our teammate and good friend Matt and I came to talk with him. We explained the move that was defeating Nandi, and then we explained how to defend it. Nandi and I, using our fingers went through the defense only once before the bout was supposed to resume. When the more advanced fencer came at Nandi again with that move, Nandi sprang the defensive move we just taught him like he had been doing it all of his life. He used it again and again until his opponent gave up and Nandi could defeat him with his favorite moves. Matt and I were stunned because almost nobody can process a complicated new defense they’d never previously heard about in the middle of a bout and use it to win and promote to the next round of the event.

In addition to being a gifted fencer, Nandi was (and is) a natural when it came to traditional partner dancing. Waltz, foxtrot, cha-cha, tango and myriad jitterbugs.

Seals rest on the Antarctic coastline while penguins hang out in the background. Photo by Nandi Kovats

After college he went to Boston where he got a job as an instructor at a Fred Astaire Dance Academy!

While on the East Coast he became fascinated with the idea of sailing classic sailing ships. And so, he joined the crew of a three-masted schooner as a cook and deckhand helping to run tours of the New England coastline from a ship based in Maine.

As there isn’t much sailing to do in the winter, he went up to Canada to learn the art of dog sledding!

After sailing in the summer and mushing in the winter ran its course, Nandi sought the biggest adventure of his life: Antarctica.

For roughly 12 years, Nandi has been a utility infielder on American science stations in Antarctica. He fills in on dozens of jobs from climate scientist to marine biologist to sanitation engineer! He has witnessed the brutal effects of global warming shrinking the ice and decimating wildlife populations. He has witnessed the miracles of scientific discovery in everything from starfish to penguins to sea leopards…which are surprisingly dangerous animals, no matter how cute they look. 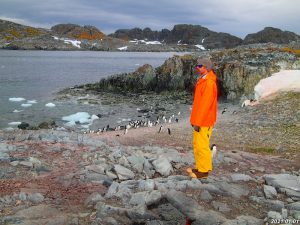 Nandi surveys the craggy shore of Antarctica while penguins make their way back from the ocean near Palmer Station.

During down time at Palmer Station in Antarctica, the scientists and support staff pass the time by teaching each other all manner of skills. Several years ago, mastering the use of a lathe became a top activity. One crew mate began teaching Nandi the art of making pens. That’s when Nandi began falling down a rabbit hole so many of us know all too well.

And that is how Nandi’s Adventure Pens was born! Collecting interesting samples of wood from every camping trip, rafting tour and other travel adventure he goes on, Nandi has begun make a fascinating array of pens with a story to tell.

Today, we are pleased to showcase 4 of his creations: a beautifully cured and stabilized spalted maple from the backwoods of Wisconsin, an aromatic juniper from Missoula, Mont., cedar driftwood from Idaho’s Selway River and larch from one of America’s greatest natural jewels…Montana’s Bitterroot Valley.

Each pen is one of a kind. There is no other just like it. Plus, each ballpoint pen uses easily found Cross-style refills!