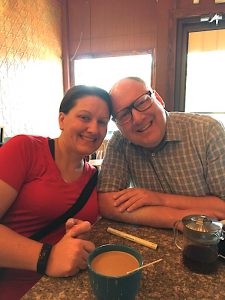 Dawn and I take a coffee break during our busy summer of 2019.

I’m engaged! Certain friends have accused me of “burying the lead” in my news of late, so I’m just gonna put this out there at the top.

Pen shows lead to true love, it turns out. Dawn and I met at the Ohio Pen Show, and it has been the most amazing relationship I’ve ever had. (She seems to agree on her side, too.) This past June, I had a custom ring made from the gold of old fountain pen nibs too destroyed to be of future service to the pen community, and I gave it to Dawn (who also loves pens) in July. She said, yes, and all we have left to do is decide on where we’ll live, tie the knot and live happily ever after. Piece of cake, right?

Of course, the world of pens has been exciting with lots of travel this summer, too! The only downside was that Dawn was unable to join me for these shows.

The St. Louis Pen Show was bigger than last year, and a huge draw for crowds. Anne and her husband continue organizing and advertising the daylights out of that show. We were fortunate this year not to have the blistering heat nor any tornadoes. 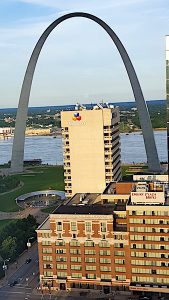 Here’s the gateway to the west, the St. Louis Arch, as seen from a roof top.

The camaraderie of this show is something else. All the first-year vendors and attendees seemed to have this bond over having been firsts to attend. It was almost like we had a secret club handshake. It was a blast to catch up, and there were some “sick,” as the kids say today to mean “awesome,” pens at that show. Vintage pen collectors found scads of old treasures, and modern pen fans were dazzled by the tons of high and low-end writing instruments.

Always popular is the free-to-the-vendors lunch, and we had a dessert party this year before the auction. AMAZING deals were to be had at the auction. If you ever want to get into vintage on the cheap, try their auction. Many of the pens were fully restored going into the auction and sold well below what they would normally get at a show or online.

Outside of the pen show circuit, I’ve continued my training on clock repair. I can fix most standard cuckoo clocks in my sleep, and I’m getting much better at sequencing spring-wound clocks.

Before you know it, I was off to the D.C. Pen Show! The traffic and customers are always amazing at DC, but my favorite parts are outside of the show. 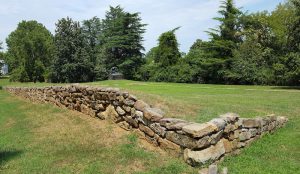 This is the Confederate’s view of the battle of Fredricksburg at the top of Marye’s Heights. This is all that is left of the original stone wall that shielded the Confederates. The ground now comes up to the top of the wall on the Yankee side of the wall, but during the battle no Union soldier made it past where you see that line of trees in this photo. Yet, nearly 10,000 dead and wounded would lay along the hillside heading down into town from this position.

I consider this to be my vacation show. Every year I try to see new sights and sounds. This year I went to the Battle of Fredricksburg National Park before arriving at the show. This has to be the smallest national park. Only a couple acres of the devastating battlefield have been preserved. What most people remember from their Civil War history is the assault on Marye’s Heights. Union troops cross the Rappahannock River and sack the town of Fredricksburg. Confederate General Robert E. Lee beat the slow-moving Union General Ambrose Burnside to the battle site and claimed the high ground. Burnside would throw battalion after battalion up against the Confederate forces atop Marye’s Heights. Hiding behind a stone wall, a mere 7,000 rebels held off at least triple their number, killing or wounding about a quarter of the Union Army. 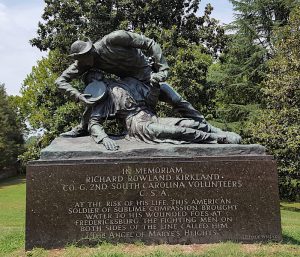 This statue pays tribute to Confederate soldier Richard Kirkland for his bravery in delivering water to the dying Union soldiers.

Yet, what really amazes me is the story of this battle that is less well know. After the battle, thousands of dead and dying men lay below this wall. The wounded made terrible groans and calls for help as they lay dying. The fighting had only barely ceased for the day. No one was rushing forward, yet, to collect the wounded for fear of being shot from above. However, the cries of the wounded were far too much for one Confederate soldier named Richard Kirkland to bear. So he scrambled out of his safe place behind the wall with a full canteen of water to offer comfort to the men he had potentially just shot…and who might still try shooting him out of resentment. As he’d go back to his wall for more water, more of his fellow soldiers handed him canteens filled with water to ease the suffering of the dying. Nobody on either side stopped his act of extreme bravery and kindness. Kirkland would eventually be immortalized as The Angel of Marye’s Heights. 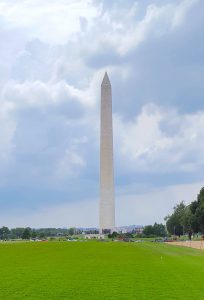 The dramatic sky behind the Washington Monument is almost as stunning as the tribute to our first president.

Having visited dozens of Civil War battlefields, it is really strange to see the entire town having grown up the side of a hill that was once drenched in blood. I wondered how many of the people knew their homes were on the site of human slaughter. I wondered if any of the homes were haunted. I kinda hoped they wereânot out of malice, just because I like haunted houses.

The D.C. Pen Show was fairly well organized this year, which was surprising given the show’s owner had suffered a heart attack only 2 and a half weeks before the show! Yet, Bob was up and running around much the same as in previous years. It was good to see him up and about. His sister really stepped in to keep the show happening this year.

Traffic at the show seemed a little down but not much. What surprised me were all of the new vendors! Many of the regulars of the circuit were not in attendance, and a new generation of vendors took their places. I never knew there were that many young people eager to get into the circuit with a host of new wares meant for pen collectors but not frequently seen at these events. There was a huge emphasis on paper, pen and paper carrying devices and a several new repairpeople I’ve never met or heard of before. 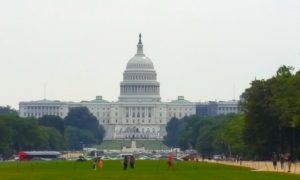 Here’s the U.S. Capitol Building on a very humid day.

However, some things never change, and nights down in the bar discussing pens until closing time, along with the joy of smoking cigars and drinking with the Black Pen Society never go out of style.

After the show, my vacation resumed with another trip to the National Mall. This year I walked the park space between the Washington Monument and the Capitol Building. It was warm and very humid, but not uncomfortable. I’ve seen so many photos of each of these landmarks, but it is quite something special to see them in real life…no matter dysfunctional the Capitol Building might be. 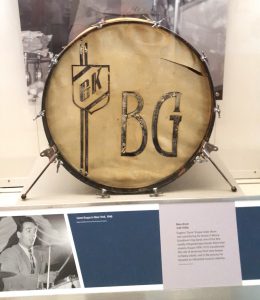 Gene Krupa’s bass drum while he was with the Benny Goodman big band making a huge hit out of the anthem “Sing, Sing, Sing.”

As a decidedly unusual child, one of the first things to go on my bucket list at age 10 was the Smithsonian Museum of American history. It took me 33 years to get there, but get there I did this summer. Some people refer to it as America’s attic, and I LOVED it. Only the gift shop sucked. I was hoping to pick up photos of the many incredible objects by way of postcards, but, those weren’t in either of the on-site gift shops I visited. So, I don’t have photos of Abraham Lincoln’s stovepipe hat, Judy Garland’s ruby slippers from “The Wizard of Oz” or the battle flag that gave us “The Star-Spangled Banner.”

It was amazing to see the first steam engine train ever used in America, the first Colt revolver, a cotton gin, the first electric lights, the first record players, Ted Williams’ jersey and cap, George Washington’s uniform and sword, the table and chairs used to sign the surrender documents of the Civil War, tons of relics from all of our wars and a 1948 Tucker automobile in silver. 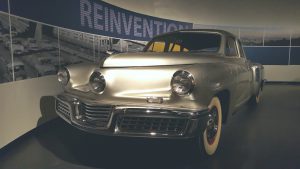 The 1948 Tucker has been one of my favorite cars for my entire life. Only 51 were made, and this is the 5th I’ve seen.

You can blame the Jeff Bridges’ movie “Tucker: A Man and His Dream” for getting me addicted to the story of the Tucker automobile, sometimes called the Tucker Torpedo. The real life Preston Tucker was an innovator and automotive junkie who worked in the auto industry and decided to buck the odds and start his own car company after WWII. His first car would use all the latest innovations of the era and put them in a 4-door sedan. Seatbelts, disc brakes, pop-out safety glass, fuel-injection, a high-power 6-cylinder rear engine and a signature third headlight that turned with the wheels that lit the way to where you were going in a turn. These were among the many other innovations in his car. He pushed his luck for as long as he could, but he ultimately couldn’t get enough financing to keep the company afloat. Only 51 of these cars were made. This silver one is the fifth I’ve seen. I’ve also seen a copper one in San Diego, a red one in Las Vegas, a black one in Dearborn, Mich., and Tucker’s wife’s personal vehicle in waltz blue in Murdo, South Dakota. It was an absolute thrill to see this silver one. 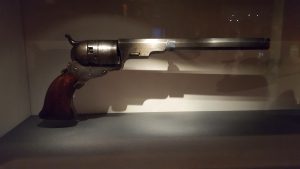 Here’s what appears to be the fifth Colt revolver ever made and the one sent to the U.S. Patent Office by Samuel Colt. Notice there is no trigger guard. The trigger flips down when the hammer was cocked. 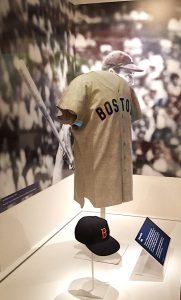 This is a uniform and cap that was game-worn by the legendary baseball player Ted Williams, who was the last person to bat over .400 in a complete season.

Given the lack of hand protection and the beautiful jade green handle, I suspect George Washington’s sword was more ceremonial than battle tested. Nevertheless, it is a stout weapon good for attack.