Pen afficianados are a pretty polite group of people, but in case you weren’t sure to do about all the great gifts you got this holiday season, don’t forget to write your thank you notes. 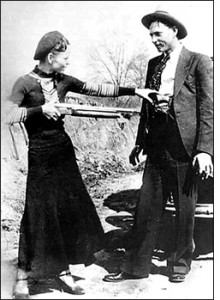 Even notorious murderer and thief Clyde Barrow was courteous enough to write a thank you note. He made sure to take a quick break from life on the run with Bonnie in 1934 to thank Henry Ford for building superior getaway cars!

The three-sentence thank you note is rapidly becoming a lost art form, and that is a shame. If someone goes through the trouble to find you a gift or do a favor, you should thank them. While an e-mail might be sufficient these days, a handwritten note or card is the ultimate way to go if you want to brighten their day. How often does anybody get happy mail in their mailbox these days?

Little thank you cards are ideal, as it is easy to fit in a 3-sentence message.

There is no great trick to composing the perfect thank you. Thank them for their gift, which you should name. Tell them why you like it. Tell them how you are going to use it. Sign it, and you are done!

Don’t limit your thank you notes to gifts. Write them for job interviews and other business matters. Job candidates who send actual thank you notes after an interview are statistically far more likely to get a call back or job. If it comes down to you and a less grateful job candidate, who do you think is getting the job? There are tons of reports out every year about this phenomenon.

You just closed a large business deal…send a thank you note. Thank yous help you stand out in other people’s memories. Who do you think they will turn to when a new product or service is needed? The guy or gal who sends a thank you note will stand out better in their memories.

If you need inspiration for a good thank you note, check out this link to 11 famous thank yous at the Mental Floss website. Notes range from personalities as big as President Reagan’s to Marilyn Monroe’s. My favorite was a missive written by notorious thief and murder Clyde Barrow (of Bonnie and Clyde fame) to Henry Ford! Barrow thanks Ford for making his V8s so fast and durable that they are the vehicle of choice when a getaway car is needed. 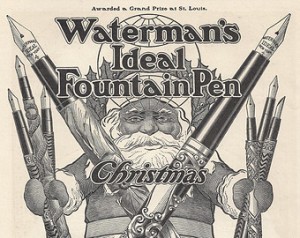 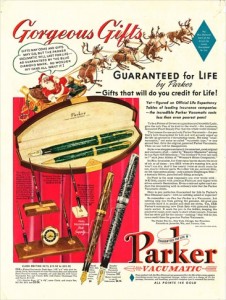 Sands are quickly passing through the hourglass.

We cannot ever guarantee the delivery date of domestic standard USPS shipping, but Tuesday is likely the last day we can ship something to you and have it arrive in time for Christmas.

Priority Mail’s last day for U.S. customers to receive a pen in time for Christmas is a Friday ship date.

Express delivery is an option, but please call ahead before making a purchase.

Among the many great holiday traditions in the Cerf family is a contest to see who can come up with the most ingenius gift for another family member at Christmas.

This is not a greedfest. The most expensive gift rarely wins. Hard-to-find and/or extremely clever often carry the day. The competition is fierce but loving, as we’re all going out of our way to find something the others will truely cherish. Some years are better than others, and there is no shame in average gifts. And in other years, average gifts are presented in such a way that trumps the gift itself.

When roughly 15 years ago my sister, dad and I all wanted the video tape of “L.A. Confidential,” instead of buying three copies, Mom gave us one copy held in a trust known as a tontine. The contract of her tontine was hilarious and not one of us can claim ownership of the movie until the other 2 are dead. (All three of us still have a working VCR.Â I told you the competition is fierce in my family.)

To be a true Cerf, you must have a thick skin and dark sense of humor.

When Christmas rolled around last year, I was at a total loss as to what to get my father for the holiday. Mostly, we had spent the better part of the six months leading up to it arguing about movies and movie stars. 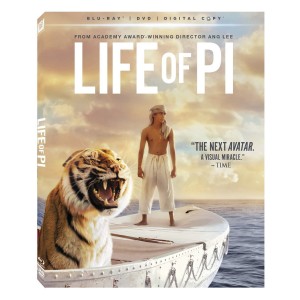 Here’s the “Life of Pi” box cover. My dad couldn’t wait to see it, while I was more resistant.

The biggest battle was over the merits of going to see the film “Life of Pi.”

Me: That looks like it’ll be the most boring movie ever made.

Dad: Are you kidding?! It has a guy, and he’s trapped on a boat with a tiger. A tiger!

Me: Clearly, as a feature-length film, the tiger isn’t going to eat the guy. So you’re going to spend 90 minutes staring at a guy on a boat with a tiger doing nothing. It isn’t even a real tiger.

Dad: But it has a tiger in it! Guy, boat, TIGER. What don’t you get? It is going to be amazing.

Me: If you want to watch tigers so badly why don’t watch Animal Planet. They have tons of tiger specials. And they are real tigers.

Dad: But this is a movieâ¦with a tiger in it.

This conversation could drag on for hours. So let me inter splice a different differing conversation.

Me: I just watched the world’s longest, most boring movie called “Far From the Madding Crowd.”

Me: Yeah, some bland blonde chick? It was made in the 1960s. It is 3 hours of nobody doing anything in some small farming village in England.

Dad: Bland?! Julie Christie was the most beautiful woman ever filmed.

Me: It isn’t like she got naked or anything. And even if she did, it wouldn’t have improved the 3 hours of my life that were wasted.

Dad: Who cares if she got naked. She’s beautiful.

Me: She didn’t do anything for 3 hours, except pine away for some lying, cheating lover.

Dad: But it is Julie Christie. She was also in “Dr. Zhivago.”

Me: She was Lara, right?

Dad: Yeah, and she was stunning.

Me: She was boring in that, too. She was only vaguely interested in Omar Shariff who ends up divorcing his arguably more beautiful, and certainly more lively and engaging, wife played by Geraldine Chaplin. I’d run off with Chaplin’s character in a heartbeat. Julie Christie was just kinda blah. Pretty for a one-night stand, maybe. But she’s got no anima.

Dad: What?! How can you say that? You’re not my son. She’s Julie Christie.

Me: This coming from a man who just wants sit in a theater staring at a CGI tiger for 90 minutes

And now you ask: You guys argued over that for 6 months?

To which my dad and I proudly reply: You’re not a Cerf.

Nevertheless, I was wracking my brains trying to figure out what to get Dad last year when inspiration struck. It required the help of my graphic designer friend Paul Szymczak, but it was the best gift I had given my old man in a good 20 years. 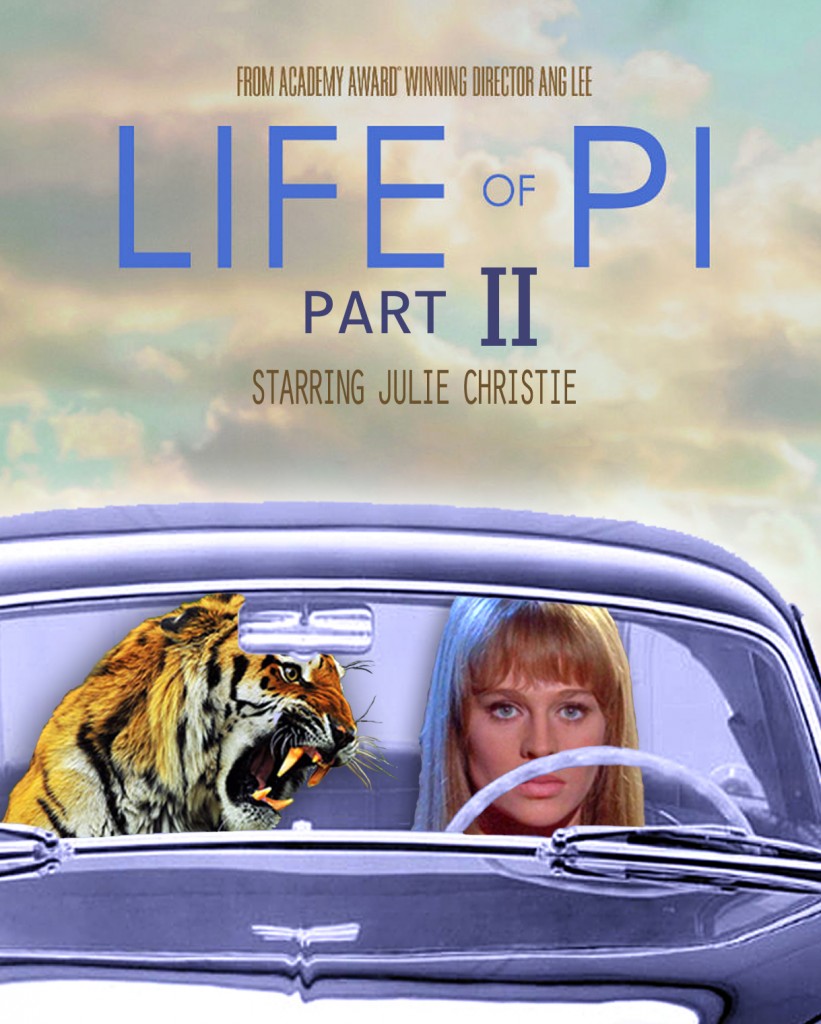 My friend Paul Szymczak created this sequel movie poster to the “Life of Pi.” My dad looked at it confused for all of one second when I said, “It’s a girl. In a car. With a tiger!” One year later he is still laughing at it.

I simply gave him a movie poster.I had it framed. When my dad unwrapped his gift he looked at it with puzzlement for one whole second when I shouted out: “It’s a girl! In a car! With a tiger!”

Then he laughed and laughed. The poster now hangs in the hallway of my parents’ house, and my dad is still laughing at it.

P.S. I finally watched “Life of Pi” with my dad, and it was way better than a Julie Christie movie.

P.P.S. Just this past weekend Dad asks, “Do you want to go see ‘All is Lost’ with me. It stars Robert Redford.”

Me: Not this again.