Time and again, I’ve mentioned the fountain pen that got me hooked into this crazy lifestyle. It was my mother’s father’s Sheaffer Balance Lifetime. Yet, I have another grandparental pen that never gets much publicity. It is a Parker 51 from my father’s side of the family. 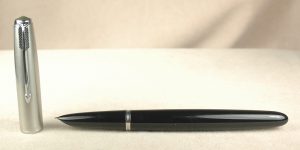 This Parker 51 once belonged to either my father’s mother or father. I suspect it was Granddad’s, but either way it is a treasured keepsake.

The Parker 51 showed up in my life about 15 years after the Sheaffer. It was right around the year 2000. My father’s mother was getting sick and had to live with my parents. As they packed up her house, they discovered a Parker 51 in a desk drawer. They knew I liked old pens and sent it to me in Montana. At the time my collection was meager. My only other pens were a Sheaffer Imperial, a Rotring, a Waterman Phileas, Lamy Safari and Cross Townsend.

I recently pulled out the aforementioned 51 to write a letter and was struck by how little I knew about pens in 2000, when it showed up in my life. It would be several more years before I learned how to restore pens. I had never heard of a Parker 51. I had heard of Parker Duofolds because I had seen a modern Parker Duofold MacArthur Special Edition at Marshall Fields in Chicago. It was well out of my price range, and although its literature mentioned the original Duofolds, I assumed that none were left in existence! Honestly, I assumed that my Sheaffer was such a rare treasure that no other old-fashioned fountain pens could possibly exist. Good Lord, when I saw that modern Duofold in 1994, I was 18, and my 60-year-old pen might well have been what the dinosaurs wrote with.

Enter the 51, and my ignorance was on full display. It still worked and had an Aerometric filler with a silicon (sorry, pli-glass) ink sac. I assumed it was some deranged promotional pen my grandmother must have gotten in the 1980s for one of her many charitable donations. It didn’t look like a vintage pen to me. I didn’t know how to look for and understand a date code then. I didn’t know that the 51 was originally released in 1941 with the advertising stating that it was 10 years ahead of its time! The design certainly fooled me, as I thought it was from the 1980s. The date code that I now understand said it was made in 1950.

My paternal grandparents were both very formal people. The black barrel and lustraloy cap could have belonged to either of them, but as my grandmother was far more into flowery and feminine design, this pen, I now understand, was likely my grandfather’s.

My granddad, as he was called, died when I was only 8 or 9 years old. I never got to know him very well. He was always nice, but he was of a generation and upbringing that children were meant to be seen and not heard. He wasn’t the type of guy to romp around on the floor with me, but I don’t have any bad memories. As I grew up, I learned he had a business in professional sales in New York City. He was into electronics, fast cars, Broadway, a little bit of baseball and cocktail parties with witty conversation. As an adult, I’m surprised at how much we have in common, and I wish I could have known him as an adult. Our similarities baffle my own father, who wonder’s how his father’s tastes could have so completely skipped a generation.

My own father and I share the love of writing. My dad prefers ballpoints and typewriters to fountain pens and computers, but, hey, nobody’s perfect. All the same, I don’t think my grandfather likely wrote much besides orders, quite possibly on carbon copy paper. This might explain why the Parker 51 has such a firm extra-fine nib. The pen barely looked used when I got it. I suspect Granddad put it away as soon as he could get his hands on reliable ballpoint pens. I wonder if in the things left behind were a first or second-year Parker Jotter. I can see him zipping down the road in his much-beloved candy-apple red 1955 Ford Thunderbird and a Parker Jotter in his shirt pocket.

Of course, it would be nice to have that Thunderbird or any one of the myriad Lincoln Continentals that he drove over the years. I am very happy with his pen, but he sure had great taste in cars, too.

A good friend recently asked me why some pens cost more than others. The cheeky, glib and true answer is supply and demand. But, it is more than that. Sometimes it is marketing. Sometimes its trends in the marketplace.

This is a “Big Red” senior Parker Duofold made of orange Permanite.

Big Reds are pretty common, especially the later 1920s’ version made of “permanite.” Most vintage collections have several of these pens. Mandarin Yellow versions of the same pen are fairly rare. They didn’t make as many, and the material used to make the yellow turns very brittle with age. As such, a large percentage of the senior Mandarin Yellow Duofolds broke. Nevertheless, these are still beautiful pens, and their scarcity makes them all the more desirable. Senior-sized Duofolds cost the most back when they came out, so many people bought the smaller Junior and Lady Duofold models to save money. As such, collectors have chosen the rarer senior models to be the favorite, which is why junior and Lady Duofold versions of the pen in mandarin yellow sell for much less than the seniors.

Mandarin yellow was a much more fragile substance to make Parker Duofolds, and it didn’t age well. These Mandarin Duofolds are much more sought after because they are more scarce.

This also is a good place to demonstrate trends in the marketplace, too. I am writing this in October of 2022. Where as a reasonable price to pay for a senior Mandarin Parker Duofold is $800 to $900, five to seven years ago, these same pens were getting $1,200 to $1,500. These pens were in higher demand back then, and dealers couldn’t keep them in stock. The market has softened some since then. Why? 2 factors. 1.) Just about everybody who wanted one of these pens back then got one if they could afford it. 2.) Sadly, we are starting to see a passing of a generation of vintage pen collectors. There are more and more of these pens on the market, and younger generations of pen users and collectors are not as excited about vintage pens. ALSO, the younger generation is paying off insanely large sums of college debt and paying tons more for skyrocketing housing prices. In their hierarchy of stuff to pay for, a rare 100-year-old pen is not as pressing as next month’s rent or feeding a young family.

Staying in the Parker Duofold family, Senior Big Reds made of orange hard rubber are usually much more valuable than the more common and less fragile “permanite.” Streamlined Senior Parker Duofolds are rarer and tend to get more than the “traditional” flat-top designs. Pristine Lapis (blue) Senior Duofolds can command a lot more money due to the fact most Lapis Duofolds turned dark and nearly black in some cases. The same goes for the Pearl and Black Duofolds. They turned brown with discoloration. If you find a pristine one, those are going to get a lot more money. Another feature on a Parker Duofold that is highly regarded is the bandless senior Parker Duofold Big Red. These pens are also really hard to find. Most Duofolds had one, two or even three bands near the lip of the cap. The bands help to protect the cap when posting it on the tail of the pen. Bandless models weren’t common, and the caps often broke when people posted them. Soooo, many people will pay top dollar for a bandless senior Duofold.

We haven’t even left the Parker Duofold family, yet. 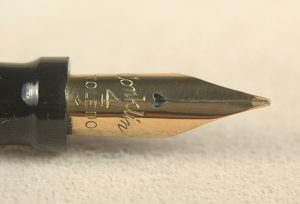 Flexible nibs are king right now. Everybody wants one, and so few pens came with flexible nibs over the years. All flex nib pens command top dollar. Basic Waterman 52s would sell for maybe $50 ten to fifteen years ago. Yet, many of their tiny #2 nibs have a little to a lot of flex, and these same pens now get between $100 and $150.

Conversely, one of the several Waterman pens that really draw big bucks are early 1920s Waterman #7 Pink pens. These were oversized…or close to it…. The distinguishing feature of these pens is a pink ring around the top of the cap AND the word “Pink” imprinted on the 14k gold nib. Waterman made these nibs specifically to be very flexible writers. All of the color-ring Waterman #7’s are fairly desirable, but Pink is the most sought. As such, these pens command much more money. You can probably find a Waterman 56 or 58 in black hard rubber from the same general time period for less…with the same basic flex nib…and save a bundle over the Pink.

Apparently, even cheap TWISBI fountain pens made in China are falling down this pricing rabbit hole. You can buy most TWISBI Eco fountain pens for around $15 to $20 brand new. However, just the other day I saw a “limited edition” transparent orange cap TWISBI Eco sell at an auction for more than $230! It was a discontinued color that people love enough to get into a bidding war over.

Most TWISBI Eco fountain pens are pretty inexpensive but this rare color model goes for more than $200 on some auctions sites.

There are probably hundreds of vintage pens (and modern) such as these to ask these questions of, and so I shall revisit this topic and question from time to time to help sort out why some pens are so much more valuable than others.