(DISCLAIMER: This is part of an on-going series of posts and not a political piece intended to stir any ire of pen collectors. Please do not flood the comments section with your love or hatred of the man. It will not be published.)

This week we head to Washington for the DC Pen Show! It will be our first time there, and it is only fitting that we look, once again, into the pens used by our presidents. As we have covered most of the signing instruments of presidents dating back to John F. Kennedy, it is time to look at the pens most used by Donald Trump.

Six months into the new presidency, it appears Trump has settled on Cross Century pens that are black with gold trim. These are the iconic skinny pens most associated with the Cross brand. Trump appears to use the rollerball version with felt-tipped refills.

Although most of these pens are made in China, Cross is still considered one of the few remaining truly American pen brands. Now that Cross also owns the iconic Sheaffer brand, I had wondered if we might see Sheaffers in the White House. 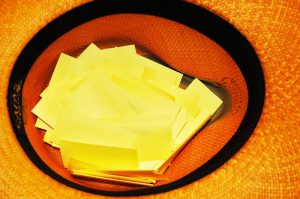 To start the celebrating early, John L. was the winner of our Lamy Lx Au fountain pen! We had more than 50 entries this year, and John was the lucky one whose name was pulled at random from our hat!

Congratulations to John on his epic victory.

Also, we’d like to send a special thanks to our Lamy rep Mike D., who so kindly acquired this brand new Lx for our June lottery!

And happy 29th birthday, America. No seriously, you don’t look a day over 240.