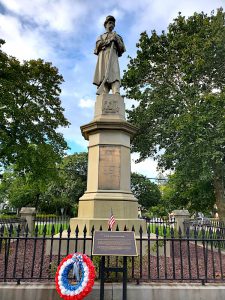 Norwich’s largest Civil War memorial can be found on the Chelsea Parade of the “Millionaires’ Triangle.”

Here in the United States it is Memorial Day. For many, it is the unofficial start of summer and a day off work and school to gather with family and friends for picnics and barbecues. The true intent of the day is to reflect on the lives lost defending the United States in times of war.

This is my first Memorial Day in Norwich, Connecticut, my new home. We are one of the oldest cities in the country dating back to 1659…founded 39 years after the Pilgrims landed just up the coast in Plymouth, Massachusetts. My walks are steeped in history. Native Americans and English settlers fought wars here against each other and against other tribes. This city was active in the American Revolution. The Sons of Liberty met at a tavern that still stands to discuss strategy and foment revolution. America’s great general and even greater traitor Benedict Arnold was born here. And, yes, George Washington once slept here.

The men of Norwich have been represented in all of our wars. The city’s greatest tributes go to the men of Norwich who fought in the American Civil War. Norwich was as Yankee as they come. Norwich began the process of outlawing slavery before America was a country in 1774. The city was a critical hub on the Underground Railroad. The city was surprisingly unified in abolitionism, and Abraham Lincoln even spoke here during his first presidential campaign. City Hall still has the banner from his visit preserved for all to see. There are at least three Civil War memorials in the city, commemorating the lives of Norwich men who served and/or died so that others could be free and the nation reunited. 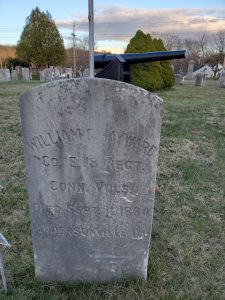 Here lies a Union soldier who died a prisoner of war at the horrifying prison camp in Andersonville, Ga.

Our cemetery is the most poignant memorial, as you can visit the actual graves of some of those men who were transported home after their final battle and lain to rest. The most powerful tombstones are those of the 9 soldiers brought back from mass graves dug at Andersonville, Georgia. If you are not familiar with Andersonville, it was the prototype of a concentration camp 80 years before World War II. Run by a German immigrant for the Confederacy, tens of thousands of Union prisoners of war were trapped in a confined prison yard with no sanitation, barely any drinking water and even less food. Photos of the men who survived were walking skeletons, skin stretched tightly over their bones.

About 15 soldiers from Norwich were known to have died at Andersonville. Norwich sent a man to retrieve all of their bodies the minute the war officially ended. He discovered 10 and was able to return 9 to our graveyard. The 9 are in a circle surrounding a flag pole and parrot gun (rifled cannon used in the Civil War). Surrounding them are dozens, if not hundreds of Civil War veterans who lived through the war and chose to be buried with their comrades who perished decades earlier.

Given Norwich’s abolitionist history, it can be little doubted these soldiers were mostly intent on freeing the slaves. Perhaps some even wanted black Americans to have the same rights and equal standing as white Americans. It was not an uncommon idea among 19th century abolitionists. Others might have fought to restore the union and deal a blow to the “states’ rights” argument that didn’t start gaining a lot of traction until after many southern states had already seceded from the Union under a pro-slavery banner.

The Civil War ended 157 years ago, and, yet, issues of equality have not been resolved and “states’ rights” sentiments have grown strong–along with voter suppression efforts–in the past 22 years.

As I reflect on this Memorial Day about those who gave their life for this country, I especially wonder what the ghosts of Norwich’s Civil War veterans would have to say about our modern society that is actively roiling in the issues they might have thought they resolved with their sacrifices so long ago.

French inks haven’t previously undergone our rigorous testing, and we were excited to give them a UV light-fast test and pH test. We purchased a small collection of a dozen different colors of J. Herbin.

We test these J. Herbin inks to see how well they can withstand UV light and to see where they rank on the ol’ pH meter.

Believe it or not, this was our first time writing with J. Herbin ink. What really struck us was the vibrancy of the dry ink on the page. Of the colors I liked best, Rose Cyclamen really pops with a purple-pink splendor. Dawn’s favorite color is the electric turquoise blue of Bleu Pervenche. Eclat de Saphir is a solid daily blue. And my new permanent addition to my daily writing is the Amber de Birmanie. It is an incredible orangy brown.

Unfortunately, 3 months of direct sunlight does not treat these inks well. All of the colors except the gold metallic ink bleach substantially in UV light. You can see the damage in the photo. Some of the really drastic changes include Rose Cyclamen turning bright, light bubble-gum pink; the blue-black Bleu Nuit turns a pale, faded purple and Violette Pensee disappears almost completely! Larmes de Cassis turns from purple to pink.

The following show the pH results for each ink. We actually had three different bottles of the Bleue Nuit, Orange Indien and Bleu Pervenche. The labels on the outside of the bottle were different, so we list these two inks by their label results, too. As a quick refresher in chemistry, a pH number of 0 is as acidic as a chemical can be. 7 is neutral, like pure water. And 14 is the maximum extreme of alkali/base.