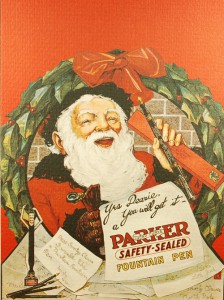 Here is Santa peddling Parker button fillers in 1900. These were the “safety sealed” precursors to the Duofold.

A close friend of the blog sent us a card that is ideal for a pen collector. It is the 1900 Parker advertising campaign, and we thought you might get a kick out of it.

It would appear that Parker once again funded the jolly old elf for another year to use his likeness.

Also, time is running out to get your orders in on time for Christmas! In conversations with customers and Postal Officials, a backlog of deliveries is starting to push back the time it takes for a package to arrive via Priority Mail.

When the post office gets a little behind, we cannot guarantee anything, but it would appear your best bet is to have orders ship via priority mail by Dec. 17. The closer you are to Chicago, perhaps the more you can fudge it, but it would be best to have your orders in to us on the 16th to go out with the mail on the 17th. 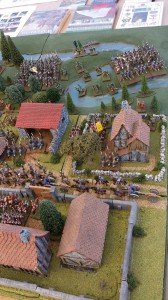 Tish, a pen collector in Canada, also takes painstaking measures to recreate battle scenes such as this one from the War of 1812. 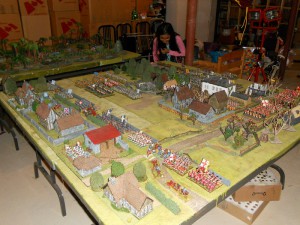 Here is the Spanish Succession at Blenheim. 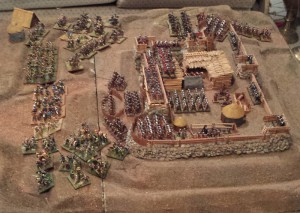 British warriors take on the Roman army in this stunning recreation.

Not all pen collectors are famous, but they might still have vast talents that must be appreciated. Many pen collectors I know have many fascinating hobbies in addition to pens and writing. Tish from Canada is into recreating scenes from battles using lead soldiers.

Through the beauty of the internet and this website, I have gotten to know Tish fairly well through many e-mail over the past few months. We share a love of history, particularly military history and prohibition crime and law enforcement history. (We all know about Al Capone and the bootleg wars in Chicago, but did you know various mafia interests also controlled aÂ substantial portion ofÂ the legal liquor elements in Canada to more easily smuggle it into the U.S.?)

Anyhow, Tish started telling me about the intricate armies he paints, and then sets up for display in his home and for local libraries and festivals. His attention to detail is mindboggling. Once he showed me the photos of some of them I knew I would have to share them with you, and he has graciously agreed.

Please take a moment to look over three of these intricate scenes from British Celts fighting against the Roman army toÂ the Spanish Succession at BlenheimÂ to a prelude to battle during the War of 1812! Please feel free to share compliments and your own hobbies in the comments section!