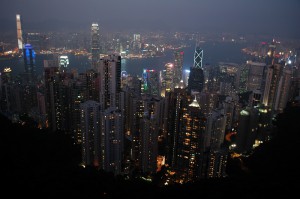 Here is the view of Hong Kong from Victoria Peak, after the lights have come on at night. This is on Hong Kong Island looking over Victoria Harbour and Kowloon, the mainland part of Hong Kong. 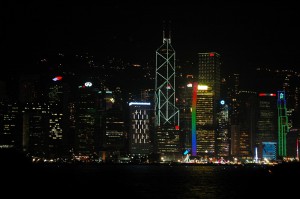 This is the night view of the colorful lights on Hong Kong Island as seen from the deck of the Star Ferry in Victoria Harbour. 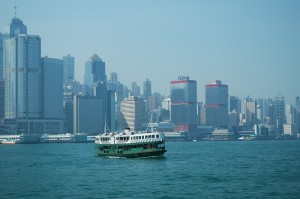 While riding in one Star Ferry boat, we passed another in Hong Kong’s Victoria Harbour. 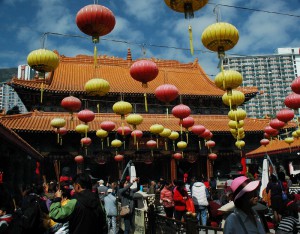 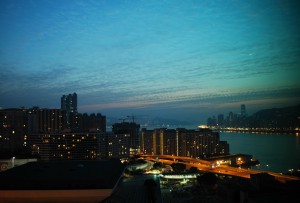 A sliver of moon prepares to call it a night, as dawn begins lighting the sky.

My long-suffering friend Maria and I hit the skyway for Hong Kong, and I feel compelled to show off some of the sites. It is the ego-maniacle photographer in me that periodically must showcase some favorite shots.

In my attempts to process the whole trip, I have failed to come up with a unifying story arc to describe the trip. Instead, I’ll just tell you some of my favorite parts.

LIGHTS! Hong Kong is huge. The lights there out glitz Las Vegas and dwarf New York. Buildings don’t just festoon lights for advertising or showcase who is home or at work via lit windows. Whole skyscrapers are specially lit with colorful external displays. I couldn’t get a good photo of it from across Victoria Harbour, but twin mini skyscrapers (only 30 or 40 stories tall) had billions of LEDs that lit up to recreate a live koi pond. The fish looked lifelike, and the water rippled when they moved. Other buildings had very active and colorful displays.

A cheesy but popular thrill in Hong Kong is the nightly light show. Most of the major buildings on Hong Kong Island’s and Kowloon’s waterfronts synced with music to put on a light show from 8 to 8:15. Each building seemingly dances to the music, and the buildings even get introductions and veritable bows.

Victoria Harbour is beautiful, when you can see across it through the smog. I especially loved crossing it on the famed Star Ferry boats that only cost 65 cents a ride. Hong Kong Island’s Victoria Peak is great, too. Both offer stunning views of the city. The photos from each were among my favorites.

Yet, there are quieter places to go inside the city if you want to get away from the modern and materialistic. We enjoyed a nice trip to Wong Tai Sin Temple, where the Taoists explore their traditions. Chinese New Year was approaching, and the temple was especially festive while we were there.

Travel in Hong Kong is extremely easy. As a former British colony, almost everyone we met spoke English. The public transportation is extremely safe and easy to navigate, which is good as cars drive on the wrong side of the road from an American perspective. Drivers are also very aggressive, not stopping for pedestrians. Cross against the lights at your own risk. We were in the tourist neighborhoods, and it felt extremely safe, even though we didn’t see a single cop until we got into the more local residential neighborhoods. And even here, the cops seemed far more concerned with seeking out prodemocracy protestors than actual crime. (That was a little scary.)(You gotta give a lot of credit to the protestors willing to spend time in a quasi communist Chinese prison to fight for greater political rights and freedoms.)

The only other drawback was the smog. If you are ofÂ a belief that man-made pollution isn’t a threat to our health and environment, you really need to spend a week in a major Chinese city. My eyes stung and breath got short quickly. These pictures were taken on good air days. We had one day in which it was 100% sunny and clear, but the smog was so thick that the sky was as grey as any rainy day in Chicago. You could not see the sun on that sunny day. You couldn’t see roughly a mile across the harbor and the buildings hidden in the smog. Many local residents take to wearing surgical masks everywhere they go to filter out the particulates to help prevent from getting sinus and lung infections.

Yet, there is so much to see and do in Hong Kong, I highly recommend going and seeing it if you can. The people are so friendly, and there are thousands of more things to see and do than simply what I’ve listed. This was a truncated list of all we did, as I don’t want to bore you.