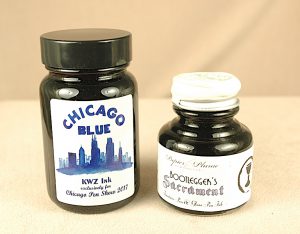 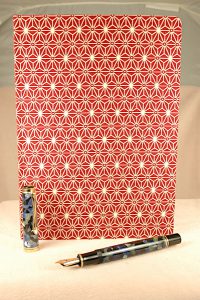 Turning it around for the Chicago Pen Show, immediately after Atlanta, is tricky, but we do it in style. In addition to cranking through a ton of vintage pen restorations, I’ve picked up a collection of Omas fountain pens which will make their appearance at our tables for the very first time. 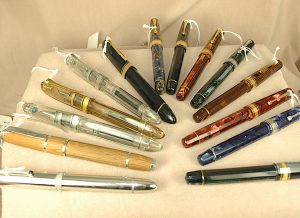 Visit us at the Chicago Pen Show this weekend for a chance to buy up 14 different Omas fountain pens not yet available on our website! We’ll have at least 100 different pens you can’t find online!

Yes. That’s a limited edition Omas made from the oak barrels of the Krup Champagne vintners in France. Good eye, you also spotted an oversized Omas 360 among the 360 demonstrators. Wait, wait. Yes. There are two Omas Milord Arco Verde fountain pens…and two Bronze Arcos…and a Grey Pearl Arco…a scarlet red and a few others!

Also on our table this year will be the newest Vibrant Pink Lamy AL-Star pens and ink! You can customize your’s with an extra-fine to 1.5mm stub nib! Show bargain only!

With a little bit of luck, I’ll even learn how to restore modern and vintage Mont Blanc and Pelikan fountain pens. We know that is an in-demand need for our customers.

Best of all, we get to hang out and talk with you in person! Please stop by and say hi. It is always great to see you and catch up a bit.