One of my favorite parts about owning a pen business is meeting so many amazing pen and ink collectors from around the world.

One of my many great new friends is a brilliant “amateur” ink historian from Germany who doesn’t want to be identified, so I shall simply refer to her as Frau Tinte. (Ms. Ink, auf Deutsch) In addition to collecting great vintage and modern pens and having a phenomenal talent with calligraphy scripts, Frau Tinte loves researching medieval ink recipes! 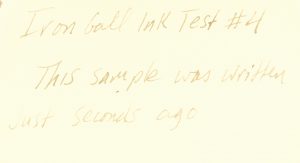 Frau Tinte’s iron gall ink goes down very faintly. You can barely read what you are writing. The cool thing is that you can smell the pomegranate and iron in the ink.

She has combed some truly amazing libraries in search of rare and original documents from as long ago as the 1200s and 1300s. As ink making was a very inexact science back then without a lot of consistent, formal measurements like today, recreating these inks is an art form in and of itself. Some of the ingredients are rather vaguely named, as the medieval German word for an item might not be what that ingredient is called today. Plus, old German scripts are practically a different language from modern German lettering. Yet, she methodically tests recipes until she can get reasonably consistent and accurate recreations.

Frau Tinte very kindly and graciously shared with me an old iron gall recreation that is partially made from pomegranates. You can smell the fruit and iron in the ink! The ink is toxic and highly aggressive in its relation to mammals, nibs and inkfeeds. She made it clear that I could only use this ink with a glass dip nib or a 14k gold dip nib with no inkfeed. If I filled a vintage or modern pen with it, it would quickly begin to eat the insides of the pen and feed.

Here are three samples of Frau Tinte’s Iron Gall Ink after a little more than a year in different elements.

Thus, I have spent the past year plus writing with it using a glass-nib dip pen. It is pretty amazing stuff. The iron in the ink oxidizes over time to get darker. Basically, it is rusting on the paper. When you write with it, you can barely read it. Yet, within a few minutes it darkens, and it can continue to darken for years. Many surviving handwritten documents from hundreds of years ago using this or similar iron gall inks are black, and you can see it is getting pretty dark in the samples, but it isn’t a true black, yet.

I thought the humid sample would have been the darkest, as it might have allowed for more rusting action, but it is about as dark as the control sample #1. The neatest result for me was the sunlight sample. The paper is bleached at leastÂ three shades whiter than the other samples. (Photo lighting makes that a little harder to see, but the difference is immediately obvious once you hold the samples together.) Although the ink is maybe a shade lighter than the other year-old samples, it is still really dark on the paper, unlike about 90% of the inks we leave in a window for only 3 or so months.

If you are looking for a permanent ink with a unique chemical signature, find yourself a good iron gall ink.

As for the availability of Frau Tinte’s creations, we are pondering the legal aspects of it on the market in the U.S. What worries usÂ are the facts that it is toxic and how it can ruin pens so quickly if used inappropriately. I know you loyal readers are bright enough not to shoot it with your whiskey or fill your pens with it, but if McDonald’s can get sued for their coffee being too hot…well, you know where this can end up. Eventually, somebody’s poor kitty will find an open, untended bottle and think it is a snack or someone who possibly received it as a gift will fill their beloved $2,000 Montblanc with it. We definitely don’t want to be responsible for those tragedies. Yet, it would be nice for people who want to try it to have a safe and fun writing experience that is centuries old.

If you happen to be a product safety lawyer and happen to know the answers to such questions, please feel free to share them with me.