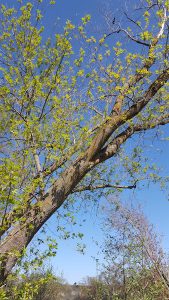 Just a great spring photo to share. It has nothing to do with the story, it is just. an evil ploy to attract your attention.

Gladys and Cora were best friends. Note the emphasis on were.

They grew up together, trading dolls, clothing and their deepest secrets.

And as they became adults, they both fell in love with Charlie. He chose Gladys and soon they were engaged. Cora swallowed her sorrow and tried very hard to be happy for her friend.

Then, just days before the wedding, Gladys on a whim or perhaps after a minor tiff with Charlie, called the whole thing off.

A year passed and Charlie called up Cora one day and asked her out to a movie. Things progressed and soon, Charlie and Cora were engaged and Gladys was enraged.

“How could you,” Gladys screamed. “You know I still love him.”

“But you dropped him, remember? Over a year ago.”

“Well, I was just waiting for him to call me back and he would have if you hadn’t stabbed me in the back!”

Gladys turned and said she never wanted to see Cora again. And then she went on Facebook and called her ex-friend all kinds of nasty names. Cora knew she should just let it pass…but she couldn’t and replied in kind.

Within a week, he passed away.

Cora was there for a graveyard service. With social distancing, so was Gladys. When everyone else had left, only Cora and Gladys remained. And social distancing be damned, hugged each other.