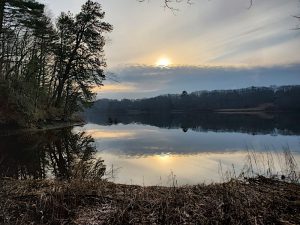 We need more serenity in our lives. Enjoy this sunset over the Thames River in Connecticut.

Teetering on the brink of a new civil war, perhaps it is time to use the Dr. Martin Luther King jr. holiday to reflect on fulfilling his dream in a whole new way.

In his quest for equality, fairness and justice for all, Dr. King advocated for peace at every juncture of policy and protest.

I fix, restore and sell fountain pens for a living. I write stories to entertain people. Iâm no politician. I intentionally avoid politics at all cost with regard to my business and this blog. BUT, I am heartbroken to see the nation I love falling apart. It is terrifying to see our capitol under siege. It is alien to have anything less than a peaceful transfer of power in Washington D.C. It is awful watching people whom I call friends so politically divided and letting their politics spoil their friendships.

As a guy who loves vintage pens, it should come as no surprise that I love reading about history. Among other projects, Iâm working on a book about the original American Civil War. Plus, with a masterâs degree in journalism, I have a fairly strong understanding about the machinations of modern media.

There is one common factor that I have observed in recent years that conservatives and liberals can agree on: the media is biased. How many times have you heard conservatives blame the liberal mediaâ¦or liberals blame the conservative media? How many of our friends who are 50+ bemoan the fact we no longer have an Edward R. Murrow or Walter Cronkite that every American can trust to tell us the facts and only the facts in a news broadcast?

Why do we have so much media bias in our current time?

In 1949, the United States enacted a law known as âThe Fairness Doctrine.â After having watched the rise of fascism in Europe and communism in Russia, American lawmakers wisely foresaw the new invention of television (and the older medium of radio) being used in horrible ways to subvert our democracy. As such, they enacted âThe Fairness Doctrine.â Under this law, nobody who owned a broadcast license could promote one political ideology or party over another. If a channel or network wanted to feature a certain political opinion, it had to balance it out with the opposing view to give viewers a fair opportunity to consider both points of view and come up with their own opinions. Any channel or network that violated that balance would be punished by the Federal Communications Commission, which was nonpartisan and watched networks closelyâenforcing the policy with vigor.

The policy remained in force until it was eliminated by Congress in 1987. Not surprisingly, we saw a sharp spike in opinion-based and biased broadcasting in the 1990s through today.

I propose that if we really want to heal our nation, then liberals and conservatives must come together to demand their lawmakers reinstate âThe Fairness Doctrine.â No more liberal media. No more conservative media. No more lopsided political coverage. No more ideological brainwashing. News shows go back to broadcasting facts and only facts.

News shows might become more boring, but after watching violent insurrection on our streets, maybe boring would be a good change of pace on TV.Â

This week marks the start of a new presidency and the start of a new cast of senators and representatives. Call or write your representatives and president this week and demand the restoration of âThe Fairness Doctrine.â It wonât solve all of our nationâs problems, but it will go a long way to help lower the national temperature and restore bias-free broadcasting to our airwaves.

3 thoughts on “A New Dream for MLK Day: Reuniting America”