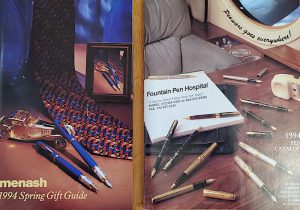 Here are two 5″ X 7″ pen catalogs from 1994! I was intrigued by the Menash catalog as I don’t know what became of that company.

Leaving the pen-collecting life behind, a friend of mine has given me his stash of catalogs and advertising from 1992 through 1994. Its contents blew my mind.

Most of the material was from 1994, the spring I graduated high school. While it is difficult for me to comprehend that was 27 years ago, what is harder to comprehend was how big pen collecting was becoming that long ago!

I found my first fountain pen in 1985 when I was 9 and adored it. It belonged to my late grandfather, and it still worked: a 1928 Sheaffer Lifetime Balance. I used it until it finally broke down, and I became obsessed with finding other fountain pens. They just didn’t exist. Not in my 10-year-old world or the various circles I moved in. I asked adults for them, and all the adults laughed and said they threw their fountain pens out years ago because ballpoints were “so much better.” Even then, I knew that was heresy.

Sheaffer sent me an Imperial to replace my grandfather’s pen, which they could no longer fix. I snatched up those terrible Sheaffer Student Pens at the grocery store. Yet, I was the only person of any age I knew who loved fountain pens. Studying German while in a San Diego high school, my teacher told us that most German kids and adults still preferred using fountain pens. San Diego had no pen stores that I knew of, and the internet did not exist. I worked a part-time job and saved most of my money to pay for my trip as an exchange student to Germany. Most of my fellow American exchange students saved up their money so they could drink heavily in a nation where the drinking age was 16. I begged my German family to be taken to a proper stationary shop. I gleefully purchased a stub-nibbed elegant black Rotring and a bottle of Pelikan royal blue ink. I wrote with that poor beast until its threads wore off. It wasn’t until the internet got more advanced that I could search for fountain pens and finally start finding them in about 2005. 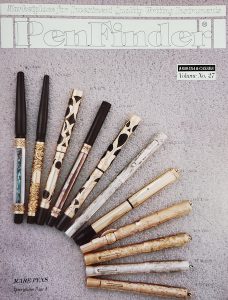 And sooo, it surprises me now to see that while I was searching the world over for fountain pens, there was a ground swell of people who did still love fountain pens…and vintage pens, at that! Plus, many of the people I know on the pen show circuit were innovators of the vintage pen revival.

For example, when I first met Glen Bowen, I did not know he founded “Pen World” magazine. He had already sold his stake in it, but his wife Susan was still the circulation director at Pen World. She and I bonded over the fact she went to journalism school at Northwestern with my father. When she later introduced me to Glen, I thought he was just a pen newbie helping his wife at the Pen World table. Ooops!

In this stack of publications is a protean “Pen World” magazine catalog he published in 1992 called the “Pen Finder.” It was printed at the same time as the early “Pen Worlds” but was a catalog of vintage pens he restored that collectors could buy. You had to subscribe to it. There were simply several glossy photos of capped fountain pens and some inner pages that served as an index of what the pens were and how much they cost. No nib photos. As people didn’t yet know the history of the pens as well then as they do now, I think I even spotted a few pens with mismatched caps and barrels. 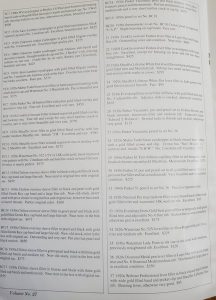 The catalog index of pens for sale in “Pen Finder.” Back then it was too expensive to print color on every page of a magazine. As such there would be color pages and B&W pages.

Without the internet, vintage pen research was a slow and ongoing process. So many of those early collectors had to do their own research into the histories of pens. And much of that was very hit and miss. The internet really made it easier for everyone to get together and compare notes and research.

I love the low-tech feel of these publications. The world-famous Fountain Pen Hospital vintage pen catalog was just a photo-copier copy of pens and prices. Bexley Pens advertised new models with a beautiful glossy photo paired with a home-printer list of features and benefits.

The more professional catalogs for new merchandise were more sophisticated, but I sure as hell wish I could get my hands on some of this Montblanc and Omas at their original pricing. Brand-new, factory-fresh Montblanc 164 Classique models for $99. Omas fountain pens for $325 to $100! FPH was selling a stash of 14k gold #5 Waterman MUSIC NIBS for $50 a piece!

Vintage pen prices were all over the map. There were rare pens for $100 or $200. Really common pens for up to $800. And, yet, other pen prices haven’t changed. Standard Parker Vacumatics went for around $125.

Ads for the Bexley Giant. Note the glossy one-page sheet paired with a home-printer fact sheet. That was not unusual advertising back then. It was fairly slick and affordable.

When I finally got some guidance from my buddy Hans who taught me about vintage pens and how to repair them in 2005, I felt like we were the last two people on earth who loved old fountain pens. With his instructions, I felt as if I was somehow reinventing the wheel or reviving a long dead religion. Yet, this is evidence I was never truly alone back then. I was just searching in all the wrong ways and places.

It is easy to be glib and say, “Oh, gee, I wish I knew in 1994 what I know now.” While that wouldn’t be untrue, I really wish I knew my pen tribe then and could take the journey with them to where we are today. Fountain pens have always brought me joy, and they clearly bring many other people joy. And while I am very happy we have found each other in this grand and glorious age of the internet, it would have been nice to have learned and shared at an even earlier age. 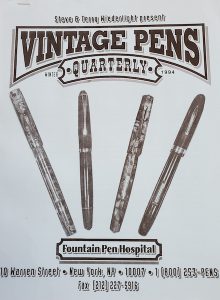