EDITOR’S NOTE: I wrote this story in 1995, at the age of 19, for my creative writing class in college. At the time, the term ‘fan fiction’ hadn’t been coined. And, you couldn’t turn on the TV or go to the movies without a serial killer somewhere in the story. I’ve been downsizing my life a lot lately, as I settle into a new house with my fiancÃ©e. Yet, when I found this old story, it made me laugh, and I thought you might get a kick out of it, too. I’ve always been a little off kilter. 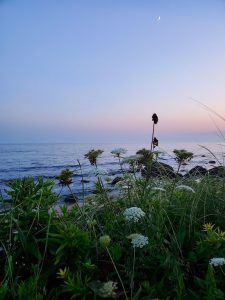 This moonrise over the Rhode Island shoreline has nothing to do with this story, but it is a pretty photo.

Ted’s muscular six-two frame hovered over an unconscious, naked brunette who was lying on a floor covered in newspapers. After taking a minute to appreciate the shine on his new hacksaw blade, he knelt down beside the woman’s neck.

“Theodore J. Greelak!” she yelled. “What in tarnation do you think you are doing?!”

Ted looked dumbfounded at her with his puppy-dog brown eyes.

“How many times do I have to tell you? No decapitating women in the living room! Hell! I bet you’ve only got one or two layers of newspapers to soak up the blood, too.”

“But, Ma, I thought it would be enough. Besides, I’m thirty-nine years old. Don’t you think I know what I’m doing by now?”

“I’ll clean it up like always, Mothhhhher,” Ted hissed, trying to keep his temper.

The pudgy, short woman in her sixties just stood there in her fuzzy pink bathrobe, with her white-gray hair up in soup-can curlers, looking very indignantly at her son.

“Okay, okay,” Ted relented. “I’m sorry, Ma. I won’t behead anymore women in the living room. But won’t this one make a great addition to our collection of heads in the ‘fridge? You know, right next to the pickle jar.”

“Apology accepted,” she said, and then with tears of pride, “Oh, Teddy, you make your mother so proud. If only your father could be here to see this. Bless his soul. Yes, she’d be perfect next to the pickle jar.”

Ted smiled. He always wished his father, The Zodiac Killer, could have seen his great accomplishments before he died. He hoped his father was watching from wherever he was.

“This time, don’t hide the body so close to your work,” Ted’s mother advised. “The cops might be suspecting you. In fact, I think I heard on TV that they had a new suspect in ‘The Headsman’ case.” 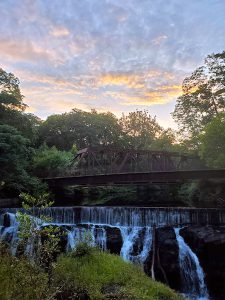 Sunset at Uncas Falls is pretty, but it also has nothing to do with this story. Just wanted to share some photographic art with you.

Ted lit up another Marlboro and took a swig from his beer. As he looked up at his friend Ron, he asked, “Do you ever have doubts about the integrity of what we’re doin’?”

“What do ya mean?” his younger friend inquired.

“Well, I mean, in all of your years of strangling, disemboweling and necrophilia, do you ever stop to wonder why? Why bother?”

“Naww, man. This is the ’80s, and we’re alpha predators at the top of the food chain. This is the life,” Ron declared. “You know what your problem is? You never have sex with the women you behead. That’s half the fun of it.”

They had a long, hard laugh, and Ted ordered another round.

Ted then turned somber. “Ya know, I’m thinkin’ of turning in the ol’ hacksaw and movin’ on.”

Ron looked at his friend with concern. “You’re serious, aren’t you? You really think you could give it up?”

“It’s just losing its spark. I mean, picking up a woman at a bar, clubbing her unconscious, ripping off her clothes and cutting off her head just doesn’t do it for me any more,” admitted the disgruntled serial killer.

“Yeah, but, you’ve held this town under a 20-year reign of terror. EVERYONE fears ‘THE HEADSMAN.’ No one can utter your name without somebody shuddering. You can give all that up, just like that?” Ron snapped his fingers to emphasize his point.

Downing half his beer, Ted tried explaining the situation further, “It’s like this, Ron. I’m about to turn forty, still live at home, have a go-nowhere job at the train station and have killed 125 women with no positive recognition. No dinner at the mayor’s. No parades in my honor. No accolades. The only respect I get is from the killer community. Hell. I’m not even the FBI’s most wanted.”

“I hear ya, but what about the integrity of your art form?” Ron lamented. “No one can saw off a human head the way you can.”

With a determined look on his slowly aging face, The Headsman knocked off the rest of his beer and made a decision. “That’s it. Tomorrow, I’m packing my trusty hacksaw in mothballs, quitting my job and moving tooooo…Baltimore.

“You are my best and only friend in this town, Ron, and I will miss you a lot, but this is something that I just have to explore.”

“Okay, but why on earth would you want to go to Baltimore?” Ron asked, with a befuddled look on this face.

“I’ve been pondering this one, myself,” Ted settled into a story. “I’m beginning to believe that fate sometimes just steps in and takes your hand. You see, this whole retirement from killing has been playing on my mind for quite some time, and then Mary-Kate, my last victim, helped me decide.”

“Why,” Ron asked. “Was it before she realized you’d kill her?”

“Oh no. She was already dead when she helped me,” Ted explained. “I was picking up her headless body, about to carry it into the bathroom to let her drain into the tub, when I noticed a peculiar ring of blood around a job listing for a sales job in Baltimore.

“Since I studied sales and marketing in college, I gave them a call. After a couple interviews over the phone, they gave me the job!”

“Congrats,” Ron offered. “But I wish you would stay. Death, murder and mayhem in this town won’t be the same anymore without you.”

ONE YEAR LATER AT A POWER LUNCH WITH HIS BOSS 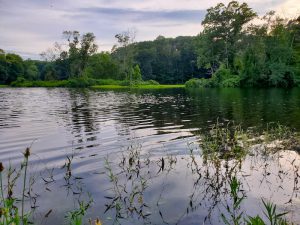 The site of the former Mohegan Campgrounds on the Yantic River. This, too, has nothing to do with the story.

“You know, Ted, it looks as though you are going to be the salesman of the month for the third time in a row,” congratulated Ted’s boss, a polished young man in an expensive suit. “You’re a real cut above the rest, Mr. Greelak. You have a killer instinct that I have never encountered in our other salesmen. We are considering making you a junior partner, if you keep up this good work.”

“Thank you, Mr. Morrison,” Ted said, a little awestruck. “That would be very generous of you and the company. I would appreciate that very much.”

“Just keep it up, and you will have earned it,” Mr. Morrison explained. “May I ask you personal question?”

“Why did such a cut-throat salesman, such as yourself, wait so long to get into this business?” Mr. Morrison asked, taking a sip of his scotch. “If you had started fifteen years ago, at your rate, you would be running the company by now.”

“You really think so?”

“Although I am ashamed to admit it,” Ted confessed, “I was sort of obsessed with women.”

His boss gave him a knowing smile and leaned back in his chair. With admiration in his voice he said, “Ahhh. A sales shark and a lady killer.”

“I guess you could say that,” Ted smiled before changing the conversation. “I’m also a little embarrassed to ask, but, does our insurance cover any psychological assistance?”

“Yes, why? Is everything all right?”

“Oh, its nothing really,” Ted half lied. “It is just that I’ve met this really special girl, and I am concerned Â about juggling the stress of an important career and a relationship.”

“No problem,” Mr. Morrison said with a devilish grin. “I will see to it personally that you get the best psychiatrist in town. Can’t let my best salesman get avalanched with stress. I’ll have the number on your desk by morning.”

“Ya know, Doc,” Ted explained while lying on a psychiatrist’s couch. “For a while there, I thought I had it licked.”

“Please tell me more about it,” instructed the doctor in his late 50s.

“Let’s see. I guess I didn’t start killing for about seven months. I was and still am rising through the corporate ranks, in spite of my late start and cross-country move. Then one day it just happened.”

“I met this fox of a woman named Joanne in a bar,” Ted relived the moment of attraction. “She had thick red hair in one of those chic short haircuts and brilliant blue eyes. Her lips were bright red contrasting perfectly against her pale white skin. I would have killed for her.”

“Yes,” Ted enthused. “I started telling her I was a serial killer and about my deranged obsessions like it was a strange pick-up line. She fell for it. Pretty soon I got her back to my place and began a new head collection in my fridge. She’s still there in my most honored greens and vegetables drawer.”

“But don’t you think you are regressing back to the way your life was when you were originally killing?” the doctor asked.

“No, no. It’s different now,” Ted elaborated. “Then I felt as though I had to continue my father’s legacy. Now I’m at one with myself. I’m living on my own and am becoming an important business man. I’ve established my own person. My murdering is now for my own personal pleasure.”

“You’re a very fascinating man, Theodore,” the psychiatrist acknowledged. “I would be interested in getting to know you more personally. Why don’t join me this Friday night for dinner? We would be having liver with some fava beans and a nice chianti.”

One thought on “Decameron 2020: The Headsman”