Even under the age of 10, I was one morbid kid with a dark sense of humor that would have suited me to be leading member of the Addams family. Among my youthful obsessions was the Bubonic Plague that wiped out a third of Europe in the middle of the 14th century. It terrified and fascinated me. I comforted myself as a kid that a pandemic like that could never happen in my lifetime. It has been about 100 years since the Spanish Flu pandemic and modern medicine and sanitation have come so far. Oops. How wrong I was. 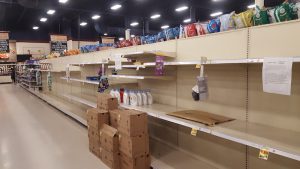 Since when did a respiratory disease need this much toilet paper? People be crazy, but you can help keep your sanity by following our project called “The Decameron 2020.”

As yet, Coronavirus is no Black Death, but it doesn’t look pleasant, either. The 24/7 coverage of the disease sure isn’t setting many of our minds at ease.

To alleviate our stress and worries, I want to completely take my mind (and hopefully yours) off the dreadful subject.

To do that I want to turn back to the Black Plague for guidance. More specifically, I want to rekindle the memory of a brilliant Italian author named Giovanni Boccaccio. Not only did he survive the Black Death, he wrote one of the most modern, journalistic narratives of it to survive. He included it at the start of his famous book, “The Decameron.”

After the first 80 pages of the book describe the lead-up, duration and aftermath of the plague, he wrote the European equivalent of “101 Arabian Nights.” The remainder of his hefty tome is the story of 10 young nobles (7 women and 3 men) in Italy who decide to survive the plague by sequestering themselves together, feasting at their various estates for 10 days while telling each other stories. Every single day, each person had to tell one story. 10 stories a day for 10 days. 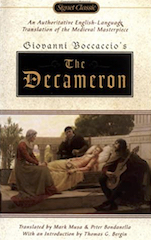 I finally read the complete “Decameron” in my 30s and was stunned by its humor, honesty and humanity. So much classic literature from that era feels stilted and formal but not Boccaccio. While I only found about 15 of the 100 stories to be profoundly entertaining, I was amazed how dirty and hilarious some of those stories were. (The book was mostly completed by the end of the Black Death in 1352, but Boccaccio’s revisions of 1370-71 are what got saved and handed down.) Judd Apatow and Seth Rogen would have actually been a huge hit in the late 14th century, just as they were in the beginning of the 21st century.

I spent my early years yearning to be a professional writer. I earned my master’s in journalism and worked in newspapers. I wrote a novel that got published and 2 that didn’t. I’ve been missing my storytelling ways for the past couple years. And, well…

With luck, my project will take your mind off your worries for a few minutes and make these days a little brighter.

As I’m no Boccaccio, I won’t be able to come up with 10 stories a day or even 1 story a day, but I hope to keep these Drippy Musing updating on a somewhat regular basis with fiction and fun for everyone. Pen news and research will continue once the crisis has abated.

In the meantime, check in regularly, be safe and stay well.