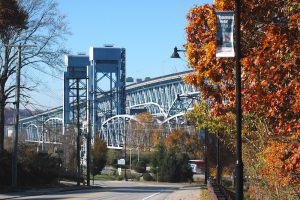 Thanksgiving hasn’t been this chaotic and stressful for everyone in America since at least World War II…possibly since the 1919 Spanish Influenza pandemic. There’s the Covid-19 pandemic, political turmoil, recession, open-rampant-growing racism, civil unrest and climate disaster for many recovering from wildfires and hurricanes.

It feels more important than ever to take a day to recognize all of the things we are grateful for in our lives.Â Me, Iâm thankful for my fiancÃ©, her mother and I all being healthy and well together in our new home. Iâm thankful my parents, sister and her family are healthy and safe. And Iâm thankful for all of my friends, whether we know each other from before ThePenMarket.com or because of it.

So many customers became friends who beautifully color my life. In Chicago, I have a Civil-War studying, vintage-camera-loving buddy with fantastic wit and a social-working, philosophizing friend who convinced me to not give up on my novel. Thereâs the salsa-dancing police detective who specializes in tracking down child abusers in Arizona. A Heinlein-loving pen collector in Virginia. A virologist who is working on the Covid-19 vaccine. A certain retired urologist in Connecticut. A retired sailor in Virginia Beach. A school teacher in Germany. A Waterman-loving Oklahoman. The nursing home nurse in Texas. Several great paramedics in Washington and Colorado. I have a 3-fingered brother from another mother down in Texas, as well as a wonderful roommate and travel buddy who loves cars as much as pens. Iâd have never guessed Iâd have as many additional new and wonderful friends from the Deep South as I do. I am a Yankee city boy, after all. And, of course, there are many, many other pen friends whom I delight in getting to know through the site.Â

The newest friend I think youâll enjoy meeting is Camy Matthay. Camy reached out to me after reading my series of stories about the pens that ended World War II. Most of those pens were Parker pens, and she is reconnecting with her late father by doing the deepest dive into Parker pens Iâve seen in years. 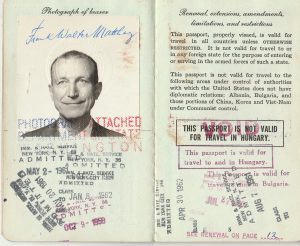 Frank Matthay in his passport issued 1959. Matthay was the leader of Parker exports from 1928 through 1966.

Who was her father? No. Not George or Kenneth Parker. Her father was the unassuming sounding Frank Matthayâ¦the man responsible for making Parker a global brand!

Her story is equally captivating as her fatherâs. Camy came along late in Frankâs life. And, unfortunately, he died of early-onset Alzheimerâs in the mid-1970s when she was a teen. His memories were robbed of him by the disease, just as she was coming of age and really interested in getting to know her father as a person more than just Dad. Life moves quickly in oneâs teens and twenties, and a little later in adulthood Camy decided to reconnect with her late father when she uncovered a treasure trove of boxes filled with his papers, passports, photos and other personal effects.

Frank, as it turns out, lived the adventure of a lifetime. Not only did he live well at a time when most of the world lived in crushing poverty, he saw the world before it lost much of its mystery. He met presidents and Nazisâgenerals and actual Amazonian headhunters. He helped give birth to the Parker Vacumatic, 51, 61 and 75!

Thankfully, Camy has shared her discoveries with me and is happy to share them with you, too. The following is my summary of her fatherâs biography with her full approval. 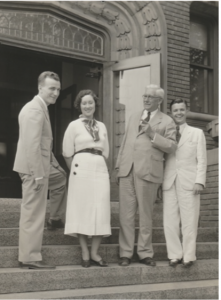 Frank Matthay was born May 10, 1904, in Beyenberg, Germany. Too young to fight in World War I, he was a talented student in what now would be considered a college-prep high school. Here he specialized in studying the classics, including the languages Latin, Greek, Hebrew, French and his native German. Along the line,Â he also picked up English.

At the tender age of 19, he immigrated to the United States in 1923. He was sponsored by his uncle. Germany, at the time, was struggling desperately with the national economic collapse of post-WWI reparations and more. He moved to Chicago, where he was supposed to work in his uncleâs grocery store. However, it seems he never worked for his uncle, taking a job initially as a soda jerk and taking night classes at a YMCA.Â

It is unclear when and where he mastered English, as well as Spanish, Portuguese and some Mandarin Chinese. Yet, his early training in the German school system likely made it very easy for him to learn any other language put in front of him.

Also unclear is how he joined the Parker Pen Company in January 1928, at the age of 23. His mastery of languages was what got him a job in the export department, and he was soon working closely with George and Kenneth Parker.

By all accounts, Frank was the life of any party with a natural gift of gab and always armed with a joke and amusing stories. He was tall and lean with a broad, easy smile and a glimmer of mirth in his eyes, plus he had a meticulously Teutonic attention to detail. All important traits for setting up a global distribution and sales network in Central America, South America, Europe, Asia and South Africa!

After a year with the company, Frank was sent on his first assignment to Cuba on the two-year-old airline known as PanAmerican. His career would actually parallel the rise of PanAm. He rode on every glamorous (and not-so-glamorous) float plane they had including the very early Sikorsky S-38, Consolidated Commodore and the extremely lux Sikorsky S-40 âCaribbean Clipper,â which was the first of PanAmâs famous âClipperâ airliners.

Frank took this photo of a Sikorsky 38 float plane taxiing to the dock.

On the success of his Cuba trip, in 1930 he was sent to Cuba, Haiti, the Dominican Republic, Puerto Rico, Germany, Denmark, Sweden, Switzerland, Italy, France, Mexico and Cuba, once again.Â During his trip to Europe on the SS Bremen, he witnessed one of the first, if not the first, aircraft launched from a ship at sea. It was a mail plane launched from a catapult to speed the delivery of the mail the ship was carrying. In 1931, he spent 6 months âon the roadâ building Parkerâs network in Australia and Southeast Asia! 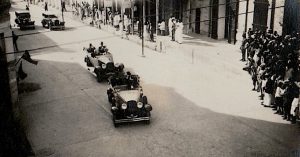 An avid photographer, Frank took pictures of all of his travels. He has images of President Herbert Hooverâs 2-car motorcade in Port au Prince, Haiti. He loved exploring volcanos. On one of his trips to Peru or Ecuador he met and photographed a tribe of headhunters. He even bought a shrunken head from them for $25 (about $330 in our current money). The images look as if they could have been in National Geographic. 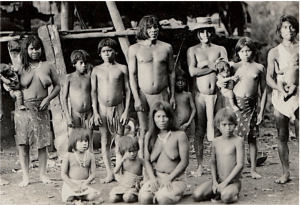 Frank took this photo of a tribe of headhunters in Peru or Ecuador. He bought a shrunken head from them for $25.

If you remember my stories about Kenneth Parker befriending Gen. Dwight Eisenhower in the Philippines, Frank was with them!

Fans of the Parker 51 will love knowing that Frank was the architect of the 1939 and â40 release of the preliminary Parker 51s in South America and the Caribbean! His itinerary in 1939 was packed with extended trips south of the border. His itinerary on PanAmerican Airlines alone cost nearly $27,000 in todayâs money. That doesnât count his hotels, meals, etc. Yet, it also laid the ground work for the sale of tens of millions of Parker 51s both abroad and at home. 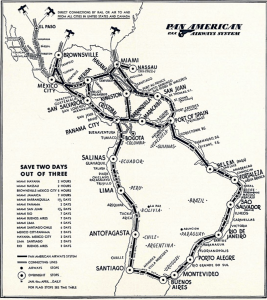 Here is Frank’s copy of the PanAm route map from 1931. Odds are really good that he flew every leg of that route.

Financially speaking, Frank was very well paid for his efforts. At the end of the Great Depression in 1939, he was making $5,000 a year. That is just shy of $100,000 a year in todayâs money. And that doesnât count for his luxury travel and adventures paid for by the company. According to records from Janesville that Camy found, he was making more than local doctors. Parkerâs famous nib grinders of 1939 made $2,400 a year. A typist at Parker would make $1,000 a year. (Other cool details she uncovered.)

Frankâs passports are works of art, colorfully illustrated with visas to scores of nations. More impressive than the stamps of many colors are the notes from customs officials. Chilling are the notes by Nazis and Italian fascists telling him where he can and cannot go. It also seemed to him at times that the Nazis had him under surveillance. As a former German citizen who became a naturalized American, he was suspicious to them.

As it turns out, they had good reasons to suspect him. He was very anti-fascism. After the outbreak of World War II, he worked with friends and family in Belgium to funnel money to the resistance fighting Nazi-occupation.

His post-war years were just as busy, as he rebuilt Parkerâs global networks from the rubble of Europeâs and much of Asiaâs destruction. 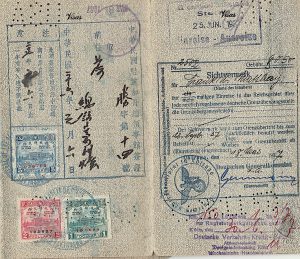 Check out the stamps from China to Nazi Germany on this heavily inked page from his 1937 passport.

Unfortunately, a life of travel and corporate empire building was rough at home. His first marriage, in which he had 3 children, ended in divorce. Later in life he remarried and had three more children, including Camy. Yet, that was difficult, too. He traveled around the world so much, a very, very young Camy thought he was one of Americaâs first astronauts for a little while.

In 1960, Parker opened a sales office in Paris, and Frank and his family were moved there to run the office until 1962.

By the mid-1960s, Frankâs memory started to fail. Very little was known about neurological diseases such as Alzheimers back then, and doctors actually thought his medical problems stemmed from diseases he might have picked up on his travels or from eating exotic native foods, such as, apparently, a still beating snake heart in Vietnam.

Frank retired as a vice president at Parker in 1966, after 38 years of dedicated service. He continued his hobby of collecting stamps and learning Russian and Sandskrit until his Alzheimers made it impossible. He passed away in 1974. 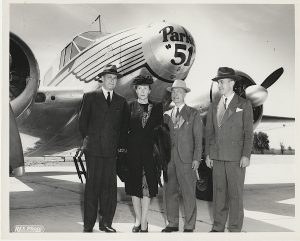 Frank is on the far right posing with the famed Parker 51 airplane. Among his many other hobbies, Frank was a licensed pilot, though I do not know if he flew the “51.”

Honestly, there are so many more adventures in Frankâs life, but I just couldnât fit them all into this post without simply writing a book. I am so thankful for Camyâs reaching out to me and sharing her stories and research. I hope you enjoy learning a little more about Parkerâs international growth and its star salesman and leader.

Have a wonderful Thanksgiving and holiday season. No matter how bad this pandemic gets, remember we are going to get through it. A vaccine is on its way. And one day, this pandemic will be nothing more than a bad memory. Thank you for visiting and supporting ThePenMarket.com. We canât do it without you, and we are so grateful for you. Stay strong and keep writing.