Now that I have the time to travel to pen shows by car (and after an airlines put $20,000 worth of pens on an extended vacation in cargo before returning them), I have determined to make the most of the road-trip experience.

Driving to the Atlanta Pen Show this year was particularly fun. In addition to loving pens, I also have been known to marvel over the American Civil War. As the drive through Tennessee and Georgia is rife with Civil War battlefields, I decided to stop in for a visit. 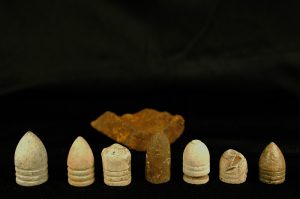 On the way to Atlanta, I made Murfreesboro my rest stop for the night. It is a surprisingly large and thriving city. I only knew it as a sleeply little junction during the war and assumed it had stayed that way. Far from. It isn’t quite Nashville or Memphis, but it is one of Tennessee’s biggest cities.

The national battlefield park at Stone’s River has been beautifully preserved. Stone’s River was a really big win for the Union as 1862 became 1863. They effectively swept the main Confederate Army out of the state, snatching a big victory from the jaws of an almost crushing defeat. The battlefield is known for landmarks such as the rocky-top terrain of the “Slaughter Pen,” Hell’s Half Acre (where a Federal brigade held off what should have been an overwhelming Rebel assault…among the members of that brigade was a young Ambrose Bierce, who would become a famous writer…a bitter wit and contemporary of Mark Twain) and the river crossing.

The national park is smaller than the full battlefield, but what is preserved is great. Plus, the guides at the info center are extremely friendly.

Just outside of the battlefield park is a Civil War antique shop. It was here that I lost my mind in Civil War relics bliss. The place is filled to the rafters with authentic rifles, pistols, swords, ordnance, spent bullets and more. The owner very kindly spent an hour with me, teaching me how to identify bullets, cannonballs and even bits of shrapnel! The inset photo features my Murfreesboro treasures. From left to right you have a .69 cal. Minie Ball (which could have been used by both the North or the South. These are, apparently, rarer to find. The Union was mostly armed with .69 cal rifles at the start of the war. As the South raided Union arsenals, they stole a big chunk of them. However, these rifles weren’t that great. Both sides replaced them as soon as they could with the superior…), .58 Minie Ball from a Springfield rifle (the Yankees’ primary weapon for the war), a spent .58 cal. Minie Ball from the battle, a .577 Enfield rifle slug (these smuggled British rifles were the primary weapon for the South), a .58 cal. Wilson’s Cleaner Bullet (a Northern bullet that was fired every 10th shot to rid the rifle barrel of sooty black powder residue and build up), a spent .58 cal Wilson’s Cleaner Bullet and a .52 cal. Union cavalry carbine bullet. In the background is a piece of shrapnel from a 10-lb. Union Parrot gun (rifled cannon). The bullets found in nearly perfect condition, he said, were likely dropped by nervous soldiers while trying to reload. You can imagine how terrifying it must be to see a line of several thousand men firing at you at once or running at you with their bayonets gleaming in the sun.

After several hours of getting my Civil War jones on, it was time to finish the drive to Atlanta. It was one of the most beautiful drives I’ve been on in years. Cutting through Appalachia was stunning. Spring had already long sprung down here, while Chicago was still just starting to turn green.

The Atlanta Pen Show was a ton of fun, as always. Jimmy Dolive and his daughter Suzanne put on quite a show. There isn’t much time for a vendor like me to wander and marvel over the pens, but it is always great seeing old friends and making new ones at the show. Many of the show’s highlights happened after trading had officially closed for the day. One of my favorite events was an informal after-hours get together in the hotel bar with many of the younger and newer bloggers and collectors. We all took turns showing off our favorite finds and latest ink samples. Plus, we all got to get to know each other much better.

Another fun night out had me at visiting the BRAND-SPANKIN’-NEW Suntrust Park, as the Braves took on the Washington Nationals. It was a ton of fun seeing the new ballpark with my Texas pen buddy Joe. The new stadium is quite nice, although I think I preferred the old one. (I’ve also been to their much earlier stadium known as Fulton County Stadium). The funny thing for me is how new it was. The vendors didn’t have their routines down, yet. The ushers weren’t really sure where anything was. The fans hadn’t developed as many rituals with the park, as they had in their old one. These things will all come and improve, but it was fun to see it opening week!

Once the show came to a close, I was on my way back home. I wish I remember the call numbers, but I listened to the greatest country honky tonk channel ever as I passed through northern Georgia. I stopped for the night in Franklin, TN.

Franklin was one of the last big battles for the Western theater of the Civil War. The Confederates were making a last-ditch, suicide effort to take Nashville and force the Yankees into a peace. The problem was that they suffered an overwhelming lapse of judgement and competency…letting the reinforcing Union Army march right through their lines without a single shot fired. Once the farming town of Franklin was reinforced, there was no chance for the doomed Confederate assault. In a charge over 1.5 miles of open terrain (a half mile longer than Pickett’s failed charge at Gettysburg), roughly 7,500 Rebels were cut down. A night of horrifying hand-to-hand combat ensued. The Union suffered minor losses compared to the full third of the Confederacy’s killed and wounded.

The townsfolk were so aghast at the carnage, they did all that they could to put it behind them as soon as possible. Very little land was preserved, unlike other major battles that became national parks. Here only three private pieces of property were preserved. I went to visit all three and was given incredible tours and insights into the battle. One farm house is still riddled with hundreds of bullet holes!

Although there was no national park to preserve it, I think I enjoyed Franklin even more than Stone’s River.

Two weeks later, it was time for my home show in Chicago! This, too, was great…and there was far less travel involved.

Later this year, I shall be attending both the Washington D.C. Pen Show and the Dallas Pen Show for the very first time. I cannot wait, as I’m told both are unforgettable experiences. I hope to see you there!