The Hit Business
By Art Cerf 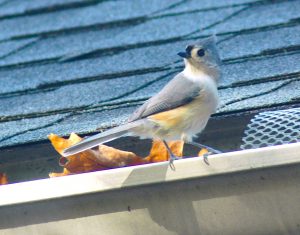 Here’s a tufted titmouse on my roof. It has nothing to do with this story, but I love these little songbirds.

Elliot Myers was a second-rate song writer and a third-rate musician.

On the dark side of 30, he lived in his mother’s basement and had no job other than the occasional gig with his band, the Misfits, (No, not those Misfits…he only wished…and was about 40 years too late.) playing at high school dances and old people’s homes. Seldom were they ever offered a return gig.

Elliot wrote voraciously…songs like “Cat, Man Do!,” “The Red Light that Stopped My Heart,” and his favorite, “I Married a Giant Squid” which started, “I’m as happy as can be when she wraps her arms around me.”

Not surprisingly, no record labels were interested. No one bought his home-recorded music over the internet. And the only thing streaming was his tears.

One night in despair, he penned “Dancin’ with the Covid Blues.” Â He posted it online for free. It was truly terrible and tasteless…and people started to listen to it. Lots of people. So many people that a Â record company offered to buy it and give him a percentage of the profits. That’s when it really took off.

Soon it was on the Billboard 100. Then in the Top Ten…and finally, number one for 12 weeks!

Elliot was on fire. His other creations were recorded, and while they weren’t quite as awful at the Covid hit, they fattened his bank account even more.

Soon he became a TV celebrity, dated women way out of his league and even got a cover on “The Rolling Stone.”

(Now I know how you readers are looking ahead, predicting he’ll get Covid and die. You are wrong. Instead he was crossing the street with his headphones on, listening to his favorite tunes and while not paying attention, was hit by a bus!)