Starting a pen collection isn’t always easy. There are soooooo many great pens out there in need of a good home. Where do you begin?

There is no right or wrong way to begin, but sometimes it helps to narrow your options.

Do you like dip pens, fountain pens, ballpoint pens or rollerball pens? Do you prefer vintage pens or modern? Do you want to write with them? If so, do you want to use them for everyday writing or do you want to perform calligraphy or Spencerian scripts? Do you just love their design and aesthetic? Are you collecting for an investment? Are you looking to make an impression during special signing ceremonies? Are you dedicated to a specific period in history and only want pens to go with what is perhaps a larger collection of that era? Do you love to tinker with things and want to learn the art of pen restoration? Do you simply love the fact that millions and millions of dollars were spent researching and designing many complicated ways to fill a fountain pen with ink?

Defining the four major types of pens is a good way to find common understanding and definitions of what you are interested in collecting. Most of this might be what many of you already know, but you would be surprised by how many people are still learning. I especially want to encourage people to learn as much as they can about this fun hobby…and obsession.

This is a modern dip pen made of Murano glass. It is great for testing new inks.

Dip pens are the most basic type of pens that use water-based inks. You can still find many beautiful examples dating back as far as the 1700s when ornate metal pens began replacing feathered quills. A dip pen can be typically made of metals, glass, wood or ivory. The writing point is called a nib, which was usually made of gold, glass or steel. To write, you simply dipped the nib in ink and started scribbling. Depending on the pen, you could write about two to ten words per dip. You can find many base-level dip pens with steel nibs for around $1. Yet, some dip pens are ornately made with silver, gold, mother of pearl, ivory and other precious materials. Big flexible gold nibs from the late 1800s are prized for their ability to create works of art with the Spencerian handwriting method.

FUN FACT: The famous American Civil War historian Shelby Foote wrote the rough draft to his extensive two-volume history of the war using an authentic Civil War-era dip pen and period appropriate nibs! He said he did it to feel a closer connection with the people about whom he was writing and to slow himself down to really think about what he was writing.

Fountain pens, also known as ink pens, use gold or steel nibs like dip pens, but these pens were the first to carry an internal reservoir of water-based ink. Originally made of hard rubber, these pens first came on to the scene in the late 19th century. Fountain pens seemed to enter their glory days in the 1920s through the 1950s. Myriad mechanical systems were invented to fill a pen with ink. Pumps, levers, buttons, pneumatics, diaphragms, pistons, cartridges and converters have all been used to load a pen with ink. Another feature unique to fountain pens was the inkfeed. This is a special assembly under then nib that delivers ink to the nib while regulating its flow. Typically, fountain pens can hold 8 to 12 legal pad pages worth of ink. Some pens can hold a lot more ink and others much less. 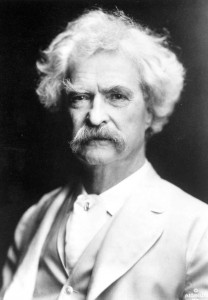 FUN FACT: Mark Twain was the first celebrity to be paid to endorse a pen company. The Conklin company of Toledo, Ohio, paid him to speak well of their Conklin Crescent. Twain claimed he liked their early fountain pen best because it carried its own ink reserve, and its crescent-shaped filling system prevented the pen from rolling off his desk. He left out the fact that he was the first author to ever write a novel on the marvelous new invention called the typewriter…and had no intention of going back to pens to write novels. Faster and ultimately easier to use and easier to read than a fountain pen, both writing instruments remained vital for myriad needs.

Ballpoint pens were first invented during World War II. Fountain pens use water-based inks drawn, normally, from glass inkwells. They are also gravity fed. Thus, while running around under fire in combat, it is difficult to keep your pen from making a mess and your inkwell to keep from breaking. A ballpoint pen uses a (typically) tungsten ball bearing at the base of a cartridge full of oil-based ink. The ink is more viscous and less likely to slop around and make a mess. The ball lets the pen write on most any surface. The early generation ballpoints had a lot of issues, primarily due to the ink drying too quickly inside the cartridge. Yet, once ink cartridges were perfected, these pens became infinitely cheaper and easier to mass produce than traditional fountain pens. The ink lasted much longer, dried instantly on the page and took a much longer time to dry out inside the cartridge. Soon the pens were gussied up with great designs that employed twists, clicks and caps to protect their writing points. These days, ballpoint pens rarely have caps and are more readily identified by being either twist or click pens.

FUN FACT: Parker first introduced its Jotter model click ballpoint pen in the 1950s, and it is still one of the most popularly sold ballpoint pens today!

Rollerball pens were the last major evolution of pen designs. Many pen users found that they missed the smooth, fast-writing action of water-based ink but preferred the ballpoint style compared to fountain pens. As such, the rollerball was born. It combined the best of both worlds by having cartridges that hold water-based ink that is delivered with a very smooth, fast and efficient ballpoint.

What type of pen is your favorite?

Me? I love all pens, but my greatest passion is for fountain pens. After discovering my late grandfather’s Sheaffer Lifetime when I was 9, I was hooked. It wrote better than anything I had ever experienced. I was a particularly strange child. I clearly remember resenting my first grade teacher who made us write with pencils. Dirty, ever-shrinking and inconsistent pencils. The sloppy, ugly stains left by erased mistakes. “Only adults can use pens,” my first through third grade teachers insisted.Â I genuinely resented them for it, and I routinely asked special permission to use pens on homework that was especially important. Weirder still, I would try to rally my classmates in protest of pencils. Honest to God! And I resented them when they preferred pencils and being shackled with the label of irresponsible children not yet ready for something as clean, dignified and mature as pens. I actually rejoiced when Ms. Bartuce permitted those of us with especially neat handwriting to use ballpoint pens toward the end of fourth grade.

You can ask my parents. I am not making this up.

I never dared bring my precious fountain pens to school, but I was particularly devoted to my clickable Parker Jotter in junior high. When I was an exchange student in Germany during my junior year of high school, all of my classmates saved up their money to drink themselves blind in a country that served alcohol at 16. Me? IÂ knew that most Germans still use fountain pens and that I could get real bargains on brand new fountain pens that would be way too expensive in the U.S. Instead of getting drunk every night, I insisted my host family take me to a quality stationary store where I fell in love with an elegant stub-nibbed Rotring. (I wasn’t totally square. I also fell madly in love with a beautiful blonde fraulein who liked me as much as I liked her. We just never drank to the point of vomiting in the gutter.)