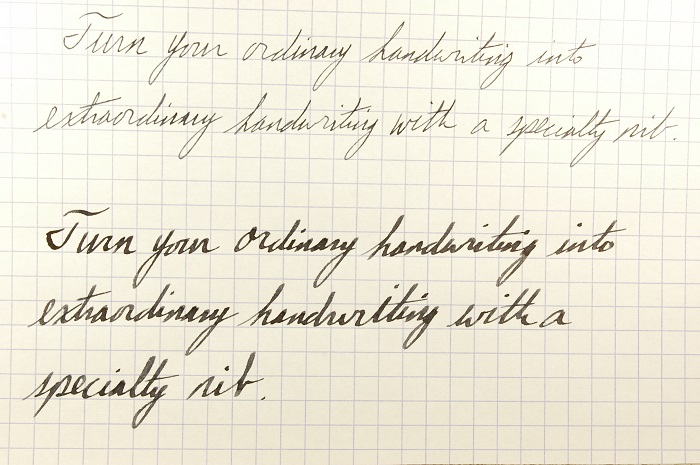 See the difference a 1.5mm Lamy nib can make for your handwriting? Not only do the letters take on more distinctive shapes, the ink, itself, provides shadows and highlights on every letter. It is far more interesting than a boring old fine-point nib.

It should be noted that my handwriting is terrible. Some of my friends who almost never write anything by hand think it is amazing simply because I can still do it. No writing expert on earth would praise it. However, with a with a nice broad stub nib, it looks much more exotic and fascinating.

You, too, can impress some of the people some of the time with a few simple handwriting tricks I have picked up over the years.

Unless you already have beautiful penmanship, I recommend staying away from those extra-fine nibs that are so in vogue today. Relax and let your handwriting out a bit to breathe. 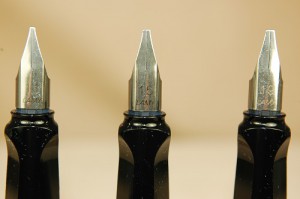 Lamy calligraphy nibs range in size from 1.1mm to 1.9mm. Each provides a distinctive nuance to you handwriting. The Lamy Joy fountain pen set is a great way to try all three sizes for fewer than $70.

Trick #2 to Handwriting Coolness: Slow down.

Trick #3 to Handwriting Coolness: Think about what you are doing. When using a stub nib, the angle at which you write becomes crucial to developing richer characters. Experiment with ways to use the flat edge sideways for skinny lines and the flat edge of the nib vertically for thick lines. Watch as you practice Oâs for how the circle should grow from skinny to fat and skinny again. See what happens when you try to grip your pen in one set position and write with your arm instead of your fingers and wrist. By setting the wrist, you can make more dynamic letters.

Trick #4 to Handwriting Coolness: Ink. If you think all inks are the same, think again. Most bottled inks are inconsistent, especially when using a stub nib. Very few blacks are true blacks, and many blues and blue-blacks are also inconsistent.

For example: Yard-O-Led Jet Black is really a charcoal grey. With a 1.5mm nib, the inconsistency is obvious, as the ink goes from black to grey in places. This gives your writing a fascinating texture and appeal. Pelikan and Cross (Okay, these two inks are exactly the same because they are made and bottled by Pelikan.) Royal Blue ink also has many inconsistent colorings when written with any medium nib or larger. Just keep in mind that Pelikan Royal Blue also fades heavily with time. It might not be ideal for your archiving projects.

I hope this helps set you on the writeâ¦oopsâ¦right path to improving your handwriting and developing a fascinating new look to your correspondence.

Yes, yes. It is a shameless plug, but I really do hope you consider buying one of our Lamy Joy sets because they really will introduce you (or a loved one) to several great stub nib variations that write well for a very affordable price under $70. The sets not only come with three nibs, but ink cartridges and an instruction manual with advice about making the most of the nibs. It is even packaged in a handy collectorâs tin.

If you really want to get all fancy-shmancy, try our rare Mont Blanc Generations fountain pen with a 14k stub nib for only $99.99.

Since letters have been invented, people have looked for ways to write them more swiftly. Scribes writing on clay tablets developed a more fluid form of writing that served as an early cursive in Mesopotamia.

The cursive writing we recognize today started developing in Europe the 16th century. Connecting letters with loops and tails seemed to grow increasingly more uniform across languages as education became more available to the citizens of those nations. Instruction was made more simply by the invention of textbooks printed using a special copper plate. Students could trace the preprinted letters with their quill pens. The resulting form of writing was simply referred to as copperplate.

For a great example of copperplate writing, look no further than the U.S. Constitution.

Copperplate served as both a simple, functional script and as something that could be made to look fancy for special ceremonial papers. As literacy was far from universal, and the need for legible handwriting was great, copperplate writing was considered something of an art form to be seriously studied. Reading and writing was no small task in the 17th, 18th and 19th centuries. Penmanship was critical.

The many forms of cursive writing in the centuries to follow evolved out of copperplate. Around 1840, a man named Platt Rogers Spencer believed it was important to make handwriting a true art form unlike those attempts that preceded him. A master craftsman in the art of handwriting Mr. Spencer developed his own variation of cursive that required dedicated training and skill to master its swirls and embellishments. The Spencerian method became the official writing style of government and corporate documents from around 1850 to 1925. Whole schools and textbooks were developed to teach this writing style around the country. The need for the super-flexible nibs most vintage pen collectors refer to today as âwet noodlesâ were essential for the modulating lines of Spencerian script that grew from extra fine to double and triple broad to accentuate a circle and add weight to the elements of each letterâs formation.

Today you can still see great examples of Spencerian script in classic century-old American brands such as Fordâs and Coca-Colaâs logos.

As elegant and beautiful as Spencerian script was, it was also time consuming and difficult to master. American business in the 19th century moved at a surprisingly fast clip by even todayâs standards, and the Spencer method of writing was too slow for the needs of offices around the country. To keep up with the newly invented typewriter, secretaries, stenographers and many other white-collar workers needed a faster way to write.

In 1888, Austin Norman Palmer came to the rescue with his own method of writing. What became known as the Palmer Method caught on quickly for its legibility and ease of use. Most of the cursive writing we learned in school is, or was, based on the Palmer method.

Although Palmer method textbooks ceased publication in 1980, the very similar Zaner-Bloser method of cursive writing remains popular to this day. Developed in 1891, the Zaner-Bloser school realized the value in becoming a powerhouse in textbook publication for their handwriting and remain one of the top sources of handwriting instruction in schools across the country to this day.

For much more detailed information about the history of handwriting and to learn how to master copperplate, Spencerian script, the Palmer Method and other forms of handwriting, visit The International Association of Master Penmen, Engravers and Teachers of Handwriting. The IAMPETH is an incredible resource for all of your handwriting needs.

Coming soon: Quick Tips for Taking Your Handwriting to the Next Level