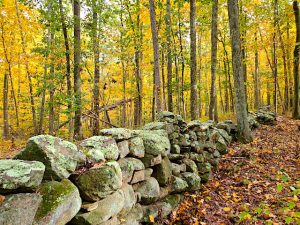 There are so many beautiful scenes to photograph in Connecticut in the fall…especially a stone wall leading to oblivion.

Vick looked up from the papers he was grading and smiled at his mother-in-law. “She’s adorable.”

There was nobody else in the living room.

Since before they moved into this fully restored, 3-story Queen Anne home in New Haven, Jane had been seeing people who just weren’t there.

Jane had early onset Alzheimer’s and was nearing the end of the line. This little girl she had been seeing since they moved into the house likely was a series of happy memories about Vick’s wife when she was a little girl.

Jane was happy and comfortable, and that was all that mattered to Vick.

Getting this tenured professorship at an Ivy League school was a dream come true for Vick. His wife Sue was an architect who was in high demand, and she could usually work from home, traveling when she needed to. She was 100% supportive of this move, and they both agreed their newly renovated home was the best home in which either had ever lived.

They took great care with the interior design. Each room was unique, creating its own ambiance. The living room was tastefully elegant in a rich 1890s Victorian motif to restore the home to some of its original state. Dark woods, red cushions and wall coverings. House plants helped fill the room with life. Ferns and vines threatened to overtake the windows and furniture. The walls had paintings or bookshelves tastefully arranged. It was Vick’s favorite room.

Sue came in and asked, “You didn’t happen to take a bath and forget to empty the tub, did you? There are watery footprints all over the floor.”

Vick gave a subtle head shake no, and they both looked to Jane, who was bare-footed, and playing patty cake by herself and giggling.

Sue sighed, “I’ll go drain the tub and clean up the floor.”

“That’s alright. I can do it,” Vick offered.

Keeping tabs on Jane was easily a 2-person job. Jane always meant well, but she had virtually no short-term memory. Frequently, she’d wander off and do household chores or yard work. It sounded great on the surface…until they discovered she never used dish soap and stacked wet, dirty dishes in the cabinets, without any regard for the contents of the cabinets and drawers in which she placed them. The pantry was forever being reorganized.

It was easier when their kids were home, but their two girls were off at college. For now, Vick and Sue tag-teamed watching Jane or cleaning up after her. The hardest part was that Jane preferred to be busy. You couldn’t just plunk her in front of a T.V. Jane preferred mowing, raking or pruning to watching T.V. Yet, to set her loose on her own would be trouble. When they gave her a trowel to weed the garden and left her alone, she forgot to weed and dug a 4-foot deep hole instead.

Neither Vick nor Sue blamed Jane. It was the disease.

During the week, a caretaker came to look after Jane. On the weekends, it was just Vick and Sue. They didn’t mind. They had set some boundaries for defining the moment they would need to find a nursing home, but they enjoyed Jane’s company and knew how much she’d hate a nursing home in her present state of mind.

They were content to give Jane as many good years, months or days as they could in their happy home. 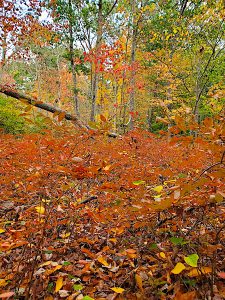 Imagine being buried in red and orange leaves.

The advantage to having kids off at college was sleeping in on Sundays and rediscovering each other.

Sue and Vick were as flirty as teenagers while making pancakes and bacon in the kitchen. Vick was nibbling Sue’s ear when Jane rushed in, out of breath and wearing nothing but a bathrobe.

“Have you seen that little girl?” she asked. “I tried to chase her, but she’s faster than me.”

“No,” Sue said, putting down the mixing bowl full of batter that she was stirring. “You want some breakfast? I’ve got some strawberries and whip cream for your pancakes. I know you like that.”

Jane left the kitchen on her quest, and Sue sighed and shrugged. “I guess playtime is over, now that she’s up.”

Vick gave her a kiss. “To be continued.”

She gave him her naughtiest smile, then Jane came running back into the kitchen.

Jane was pale and trembling. Panic was in her eyes.

“It’s okay,” Sue soothed, as she embraced her mother.

“What did he look like? Where is he?” Vick questioned, grabbing a long, sharp kitchen knife.

Vick was a pudgy college professor, not a knife fighter, but he figured something was better than nothing.

Jane was at a loss for words Â and just pointed out the kitchen entrance she came in.

Searching the first floor, Vick saw no trace of anybody. No broken windows. No disturbed furniture. No stolen items.

Snorting a small laugh, he put together the pieces of the puzzle.

He took the package back to Sue and asked Jane, “Did you see the delivery man? Is that who scared you?”

“I’ll check the rest of the house,” Vick said. “But, I think we found our culprit.”

“Thanks,” Sue agreed, as she took the package.

Nothing was amiss as Vick explored from low to high. The only thing out of place was that the 2nd floor bath tub was full, again. Muttering to himself, Vick drained the tub and sopped up the mess on the floor with a towel. 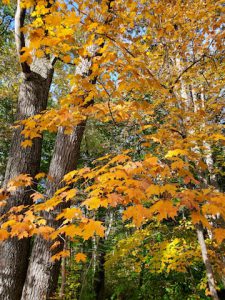 Not sure there is anything more beautiful than maple leaves at peak color.

Raking the last of the front yard leaves into a huge three-foot pile, Sue and Jane were dressed in gloves and heavy sweaters.

It was a crisp, late-October day.

“Watch that little girl play in the leaves,” Jane said, resting on her rake.

“I don’t know about any little girl,” Sue smiled mischievously. “I think you want to play in the leaves.”

“Noooo,” Jane protested. “I’m too old. What will the neighbors say?”

They both laughed like they did when Sue was a little girl.

When they tired of laughing and throwing leaves at one another, they lay quietly staring at the cold, grey sky through the nearly naked branches of an old oak tree.

“I don’t think I’ve got another winter left in me, Sue.”

Sue was shocked by the sudden return of dementia-free clarity.

“Not any more.” Jane was silent a moment before continuing. “I really want to thank you and Vick for how well you are taking care of me, but I want you to know that it is okay…whatever it is you need to do to take care of me.”

Tears welled in Sue’s eyes, as she took in the full permission of what her mother was granting her.

“I love you, too, Mama,” Sue said, hugging her tightly and crying. “I miss you so much.”

They cried and hugged some more, and before either of them was ready, the dementia returned.

“Why are you crying?” Jane innocently asked, oblivious to her own cheeks wet with tears.

Sue tried hard to compose herself quickly. “Nothing. Nothing, Mama. How about some hot cocoa?”

“Only if my little friend here can have a cup, too,” she said, climbing out of the leaves and on to her feet.

“Of course,” she agreed, absently wiping her nose on her sleeve.

Later Â that night, just down the hall from her loving daughter and son-in-law, comfy and warm in her bed, Jane passed away peacefully.

On October 30th, a small grave-side service was held for Jane. Her granddaughters came in from their respective colleges. Nobody in New Haven knew Jane, but a couple of Sue and Vick’s colleagues came to offer their support. The girls were upset. Sue and Vick had far more complex feelings. They were sorrowful for Jane’s passing. She died too young from a disease that deprived her of her memories and personality. Yet, being her constant caretakers had taken a toll on them, too, and they felt guilty for feeling some relief.

At midnight Vick was awakened by a small hand gently patting his shoulder. He groggily thought it was one of his daughters, momentarily forgetting they were now grown women.

Through his bleary eyes he saw a 9-year-old girl patiently standing next to his bed. She had curly hair like Shirley Temple and was wearing a 1940s’ dungaree jumper.

Coming to his senses, he gasped and sat up in bedâscooting backward until his back was against the headboard.

Sensing his fear, the little girl took a step backward and asked, Â “Where did Janey go? I haven’t seen her for a couple of days.”

Sue started to stir next to him.

“You know me,” she explained. “I’m Janey’s friend. You called me adorable once when we were playing in the drawing room.”

Sue was coming to her senses and trying to understand what a little girl was doing in their bedroom.

Vick tried to explain gently to someone whom he wasn’t sure existed, “Umm. Jane died several days ago.”

She looked at him quizzically, as if she didn’t quite understand.

Then a soft familiar voice playfully called from down the hall.

“Evvvvelynnnn. Come out, come out wherever you are.”

“Oh! There she is,” said the little girl, perking up. Then her eyes widened and fear shown on her face. “I forgot to warn her about the man with the bloody arms in the bathtub!”

The girl faded away as she looked like she was going to run out of the room.

Seconds later Jane screamed from the middle of the hallway.

“Mama!” Sue shouted, as she and Vick ran down the hall to the bathroom. Moments later they were joined by their daughters.

They stood silently watching the lit bathroom. Nobody else was in the hall or bathroom, but the tub was full and wet footprints led to the hallway and vanished.