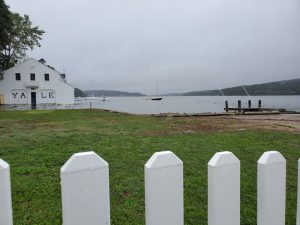 Greetings from Gales Ferry, home of the Yale Regatta. Here’s hoping you have a funny, sunny Labor Day.

Happy Labor Day Weekend! I hope this finds you and yours doing well, staying safe and hopefully not bored out of your minds. But if you are bored and you can handle watching another movie or two, I take a look back on fun classics from yesteryear. As before, these aren’t hard-to-find movies that are only brilliant to a handful snobs sharing the same drugs that allow them to see the genius in what the rest of us would find mind-numbingly boring. These are great classic films that modern audiences might have not known about or seen when they came out but deserve a chance. There aren’t many Labor Day-themed movies out there, but I do skirt 1955’s “Picnic” because I find that classic melodrama as depressing as all hell. And the year 2020 does not need another anything depressing.

MR. HOBBS TAKES A VACATION (1962): Jimmy Stewart is a stressed-out banker in need of a quiet romantic get away with his wife (Maureen O’Hara) and ends up on a summer vacation with the whole family that is anything but quiet and relaxing. Even teen heart-throb Fabian gets in the act. When I saw it first as a kid, I thought it was kinda lame, but as an adult looking at it more from the lens of Jimmy Stewart, I laughed pretty hard and thought it was rather inspired. Ultimately, this film set the template for many family vacation movies that would follow throughout the years. But, to the best of my knowledge, this is the ur vacation classic.

SUMMER RENTAL (1985): I’d like to say this John Candy classic is too young for this list, but it is 35 years old. It always seems to me to be one of the most overlooked Candy films, but it is one of my favorites…and a total total descendent of Mr. Hobbs. Candy is a stressed-out air traffic controller forced to take a vacation with his wife and kids. Candy’s take on it is more centered around getting in touch with his self while also struggling against a pompous rich sailor who is set on ruining Candy’s vacation. Comedian Rip Torn is hilarious as a pirate-like sailing instructor who helps Candy take control of his life again. Jimmy Buffet wrote the theme song.

ON THE TOWN (1949): If you’ve only got one day to see New York City and find âah-hemâtrue love, Frank Sinatra, Gene Kelly and Jules Munchin are just the sailors to show you how. This high-energy musical is loaded with hit songs and great dance numbers. The girls the boys fall for aren’t too shabby, either. Vera-Ellen, Ann Miller and Betty Garrett are easy on the eyes and pretty clever to boot. It is a great postcard of NYC during its technicolor post-war glory days. Ironically, the film is older to us now than the 1900-guide book used by Frank Sinatra to see the city in the film.

ROMAN HOLIDAY (1953): Audrey Hepburn is a bored princess who escapes her gilded cage of royalty to see Rome. The sleeping pills her family gave her kick in while she is exploring the sites at night, and ruggedly handsome Gregory Peck is the American journalist who spots her passed out like a typical drunken tourist. Not recognizing who she is but seeing she is in danger, he takes her home to let her safely sober up. Recognizing her in the morning, he plots to write up an exclusive while taking her on a tour of the city, but as they fall in love he realizes he might not be up to his more cynical task. Pure escapism doesn’t get more charming. Also of note, the film was secretly written by the black-listed Dalton Trumbo who couldn’t collect his Academy Award for best screenplay on the film until decades later.

AUNTIE MAME (1958): Rosalind Russell is the one and only Auntie Mame who will help open up worlds for you that you never dreamed existed. A madcap millionaire flapper with a genius wit and sense of adventure navigates motherhood when her brother dies and leaves her his 10-year-old son, Patrick Dennis. Her unconventional mothering on the cutting edge of style, music, philosophy, theater and literature is a riot, and I dare you not to want an aunt like that of your own. It has been one of my favorites since the day I first learned how to blow bubbles with bubble gum. The movie is based on two novels by “Patrick Dennis,” and each of the novels is an absolute laugh fest if you ever get the chance to read them.