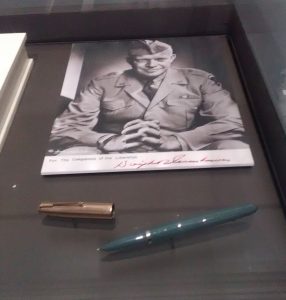 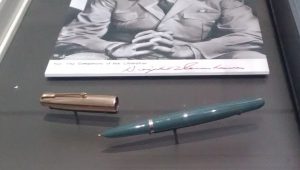 It is hardly ground-breaking news that Gen. Douglas MacArthur signed the “Instrument of Surrender” ending World War II with Japan while using a Parker Duofold “Big Red” (among other pens) on the deck of the U.S.S. Missouri. It is a fact Parker touts time and again, even making a commemorative series of modern Duofolds to mark the 50th anniversary of the end of the war. 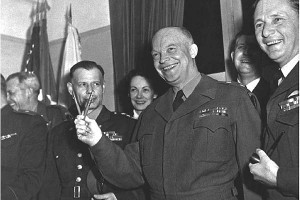 Gen. Dwight Eisenhower holds up 2 of the pens used to sign the German surrender, ending World War II in Europe in May of 1945. One of those pens is a Parker 51, which is now on display in Abilene, Kan., at the Eisenhower Presidential Library and Museum.

In the late 1920s, the Parker Duofold was advertised as being indestructable. Surviving WWIIÂ and bringing it to an end seemed elegant proof. Yet, people of the era fussed a bit about the famous general using such and old out-of-date pen–as if years of dependable service didn’t matter.

Rarely, however, is it mentioned what pen General Dwight Eisenhower used to sign the surrender of the German army.

I, myself, would not have known had it not been for a trip to Paris several years ago and a flurry of messages today. I love military history and could not pass up the chance to see “L’ Invalides” where Napoleon rests in his giant sarcophagus. Part of the grounds holds Musee de l’ Armee (a.k.a. The Museum of the Army). It was phenomenal. The swords and armor, the WWI tanks, the early rifles and muskets of the 1600s and a large display about the French Resistance and WWII.

Gen. Douglas MacArthur signed a peace agreement with the Japanese using a Parker Duofold “Big Red” similar to this one in August 1945. I don’t believe MacArthur’s Duofold was streamlined, though.

My eyes, long accostumed to spotting vintage pens in cluttered antique stores, instantly picked out a pen among a somewhat cluttered case full of war documents. It was the ugliest Parker 51 I had ever seen. It was olive drab, and the gold cap was tarnished almost beyond recognition. That led me to ask, what was an American fountain pen doing in the French army museum. The answer: It is the pen Gen. Dwight Eisenhower used to sign the documents of the German surrender. Or so I thought…

Several weeks before writing this post I contacted the Musee de l’Armee to send me a photo of the famous Parker 51 and any information they had about it. I did not hear from them until after the original draft of this story posted.

“We didnât have any pen once owned by General Eisenhower,” wrote a museum employee.Â “The only one we have in our collection is the pen of General de Lattre de Tassigny used to sign the surrender of Germany in 1945.”

Without the presence of mind in 2010 to photograph the historic pen, I was only left with my memory, which was certain it was a Parker 51 belonging to the future president. If I had only known then that I was going to create a blog in 3 1/2 years.

Later today help came in form of one of the ultimate authorities about Parker pens: Geoff Parker, the grandson of the famous Parker CEO who gave Ike the very Parker 51s used to sign the armistice with Germany!

“The actual story behind that photo is a bit more complicated,” Parker wrote.Â “My grandfather, Kenneth Parker, and Eisenhower happened to meet in the Philippines in 1937 and became good friends. The two stayed in contact for many years. KP provided Parker 51s to Eisenhower as the end of the war approached. The Eisenhower Presidential Museum/Library in Kansas displays the 51 used in that ceremony which Eisenhower presented to President Truman. There were probably more than one, in order to represent each of the Allies.”

As if getting the rest of the story from Mr. Parker wasn’t already enough to blow this lifetime collector’s mind, he very kindly sent me a photo he took of the actual Parker 51 on display at the Eisenhower Library that ended World War II.

This modified Parker Duofold from around 1930 was used by French General de Lattre de Tassigny to sign the German surrender that ended World War II. The photo was given to us by the Musee de l’ Armee in Paris. The twist of the story is that this is not the pen that started the whole story in the first place. Where is that Parker 51?

The plot thickens: It is now October 17, and I have received a photo of the pen used by France’s Gen. de Lattre de Tassigny. It is a unique Parker Duofold circa 1930 with a glittering red candy finish and black flecks. Those Parkers are rare. Rarer still is the fact this one is missing its original Parker clip and has an after-market steel clip wedged over the broken clip and top of the pen. We actually have an original fully intact version of this pen for sale at ThePenMarket.com.

Now do you think the story is over? Of course not. This is not the pen I saw in Paris at the Musee de l’ Armee! I know beyond the shadow of a doubt I saw a Parker 51 in a case. I am more certain once again it is a pen marked as Gen. Eisenhower’s. Geoff Parker said Ike likely used several Parker 51’s to sign the surrender and gave them to each allied nation. So perhaps that is the pen he gave France. But, why doesn’t the museum have it cataloged?

Unless I beat you to Paris, pen fans, you have a mission: Find and photograph that pen! Please submit it so that we can share it with everyone on this blog and put this story to bed. It might be like finding a needle in a haystack, but here is where I remember seeing it if it helps your quest to find it. The pen was in a waist high glass case, in a room dedicated to World War II on the main floor. It was a room that I recall having two entrances–one on each side of the room but on the same wall. This case was on the right side of the room if you stood facing the case and the exit. When I was there, the WWII exhibit looked as if it hadn’t been moved, changed or altered since the 1950s. I suspect it is still there waiting for one of us. Good luck on your quest.