The Undertaker
By Art Cerf 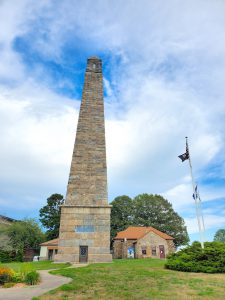 Having nothing to do with this story, here’s a Revolutionary War memorial to the patriots massacred at Fort Griswold in Groton, Conn., by British soldiers under the command of the traitorous Benedict Arnold.

Businesses across America were crashing but not Buddy Seldon’s. You see, Buddy was a mortician, inheritor of a small family business. And business was soaring.

Buddy was working seven days a week, 12 to 14 hours a day, preparing up to four funerals a day, due to the Covid pandemic. By the time he would head home at night, he just had time to feed his cat, Abby, and throw a frozen dinner into the microwave. After eating, he would fall asleep from exhaustion, sometimes on the couch unable to make it to bed.

He had no personal life. What started as a promising relationship with Rachel Morrison died when he no longer had time to spend with her.

His only solace was the money was pouring in. He was clearing six figures after expenses every month. At this rate, he figured he’d be a millionaire within a few more months. Then he’d sell this profitable operation for even more money and then go live the life he wanted.

And that day finally came. He signed the sale papers, deposited the check and started making plans.

He called his travel agent and told her to book a month-long tour of Great Britain, from Scotland to Southhampton, from London to Wales.

The agent replied, “Sorry, Buddy, but you can’t travel to Britain…there’s a two week quarantine for all travelers.”

“No can do,” said the agent. The EU has banned American tourists.

“How about Australia and New Zealand?”

She added, “I could still get you into Brazil, but I don’t think that would be very wise at this moment.”

Buddy said: “Okay…how about travel in the States. I’d love to have a spree in New York City.”

Again, the agent paused. “You live in one of the states from which New York is not accepting visitors, unless you quarantine for two weeks. And you don’t want to go to Florida or any other Southern states, Texas, Arizona or California.”

Buddy thanked her, opened a beer and had no idea what to do next.