Neil Simon is one of my favorite playwrights, and I wasn’t 3 minutes into the film adaptation of his autobiographical “Biloxi Blues” (1988) when I spotted an Esterbrook LJ in the hands of Matthew Broderick, the star of the film playing Eugene Jerome (a.k.a. Neil Simon) as a young, wise-cracking soldier from New York experiencing bootcamp in Biloxi, Mississippi.

Not quite as funny or famous as Simon’s bigger hits, “The Odd Couple” or “Barefoot in the Park,” “Biloxi Blues” is the quasi sequel to Simon’s “Brighton Beach Memoirs,” which follows the early adolescence of Eugene.

In both films, Eugene is constantly dreaming of becoming a writer and scribbling down all of his observations in his diary.

“Biloxi Blues” starts on the overcrowded troop train heading south to Mississippi, where Eugene is desperately trying to collect his thoughts while surrounded by young recruits from all over the country with whom he has nothing in common. It is mid-1945, and Eugene and his fellow recruits are training to be part of the invasion of Japan before the nuclear bombs are dropped.

The movie is a fun coming-of-age comedy, and Christopher Walken practically steals the whole show as Eugene’s strict authoritarian (and slightly insane) drill sergeant. Toss in a light romance with Penelope Ann Miller, and you’ve got a solid 90-minute movie experience.

Of course, true pen fanatics will see the vintage pen discrepancy immediately. The film takes place in 1945. The Esterbrook J/LJ series didn’t launch until 1948. Don’t let that spoil your fun with the film, and if you want some colorful Esterbrooks of your own to play with, click here to see our rainbow of Esterbrook options. 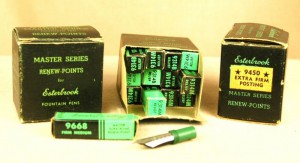