Did you know that toys paid for the pen that ended WWII with Italy?

Fabulous readers Francis Turner, Tom C., Gary C. and Mike C convinced me otherwise. All four of these men are unrelated and each reached out to me independently of one another and very close to the same time.

Yes, I had discussed the surrenders of Japan and Germany, but I had left out the critical surrender of Italy and its new-forged partnership with the Allies.

After all of the other mysteries were solved, I never would have guessed that toys would be at the center of the story about the pen that ended the war in Italy. 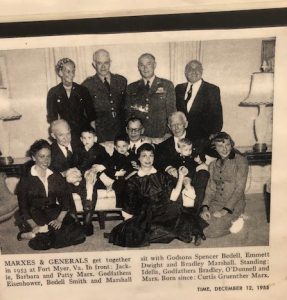 Louis Marx’s family sits with several of the generals who won WWII. Many of the young boys in the photo were named for after a general. Photo courtesy of Francis Turner.

Enter Louis Marx. To the best of my research, he had nothing to do with the comical Marx Brothers. Instead, Louis Marx and his brother David were toy makers in New York City, when they opened their own company in 1919. Their particular talent in the early days was taking the ideas of current childrensâ toys and making them better, more durable and cheaply than their competitors. They also were better marketers. Although they did not invent the yo-yo, they were the ones initially behind making it world famous in the 1920s. They and their company would go on to invent thousands of other toys, famously including Rock âem Sock âem Robots and my absolute favorite toy as a little boy: the Big Wheel.

Marx Toys was one of the few companies to thrive during the Great Depression, and along the way Louis happened to become very close friends with the men who would go on to save the world from fascism. Yes, his close friends included Dwight D. Eisenhower, Walter Bedell âBeetleâ Smith, Omar Bradley, George Marshall and Curtis Lemay. Talk about having powerful friends in high places. 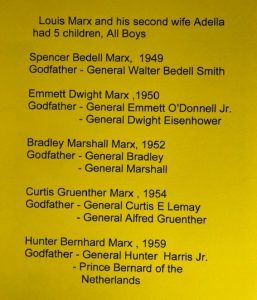 Were they really that close as friends? Absolutely. Smith gladly took on the role of godfather to Louis’ first son, and Eisenhower served as godfather to his second son. In fact, eight of the leading Allied generals of the war would volunteer to be the godfathers to 5 of the Marx children.

Much the way Kenneth Parker gave his old buddy Eisenhower Parker 51s to sign the surrender with Germany, Marx gave his buddy Beetle a pen to use for a surrender ceremony. Use it he did, but before we get to that, letâs take a quick look into the life of Gen. Walter Bedell Smith. He remains a fascinating character. 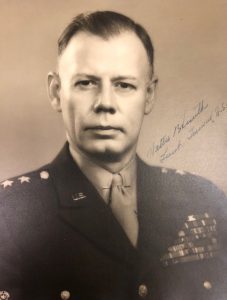 Gen. Walter Bedell Smith signed the armistice with Italy and also the German unconditional surrender. He later became head of the C.I.A.

Best known as Eisenhowerâs âhatchet man,â Smith is remembered as Ikeâs Chief of Staff at several crucial points during WWII. Although he was often tough as nails, he was far more politically savvy than people gave him credit, and he really embodied much of the American dream rising out of nowhere to become an important figure.

Smith was born in Indianapolis in 1895. He didnât graduate high school, but he did attend a little college before eventually joining the Indiana National Guard in 1911. He remained in the Guard helping during floods and even as part of the Pancho Villa Campaign on the southern border. He spent 6 long years in the military as a private and then non-commissioned officer until World War I. Given his incomplete education by todayâs military standards, heâd have never gotten very far in the ranks, but the Army needed young men with any military experience, and he was promoted to second lieutenant in Europe in 1917. Wounded at the front, Smith recuperated and earned a promotion to first lieutenant, a rank at which heâd remain for another 10 years, as he also furthered his education. After achieving his rank as captain, heâd stick it out 10 more years to make the rank of major in 1939. Then World War II began.

Experience and a swelling Army made his quick promotions to Lieutenant Colonel and âfull-birdâ Colonel inevitable, but it was his tenacious hard work and talent for organizing and co-ordinating between Allied army units that rocketed him up the ranks to become a 1, then 2 and 3 star general serving as the chief of staff first for Gen. George Marshall and then Eisenhower. 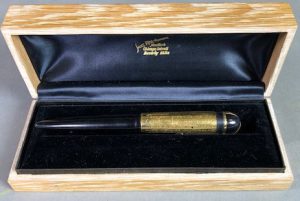 This is the Wahl-Eversharp Skyline pen given to Gen. Smith by his friend Louis Marx that was used to sign the Allied armistice with Italy on Sept. 3, 1943. Like so many other Skylines, its cap sleeve has come loose and is sliding down the cap a little.

In August of 1943, Ike entrusted Smith on a secret mission to negotiate an armistice with Italy, which would then join the Allies against the Nazis. By Sept. 3, they had signed a deal with this Wahl-Eversharp Skyline fountain pen given to him by Louis Marx. Pay close attention to the engraved gold cap sleeve and the engraved plate on the pen box! Tom C., a former accountant to Louis Marx Jr., Â was the first to tell me about this pen, and he would go on to sell it and another important pen to Francis Turner.

Turner is the gentleman who first explained the Marx connection to me. You see, he is the owner of the Marx Toy Museum in West Virginia, near the site of one of the original Marx toy factories. Although the toy museum is no longer in daily operation, you can take a virtual tour online, while many of the physical exhibits are on tour at other museums around the country. 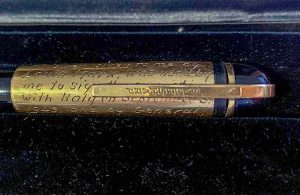 A close-up of the specially engraved cap of the Italian armistice pen.

Turnerâs passion for Marx Toys is on par with the most devoted passions for pens that I have ever seen, and it was pens that brought our paths to cross. I cannot thank him enough for many of the photos in this post and the stories that go behind it.

As we learned in previous posts, Kenneth Parker gave Eisenhower Parker 51s to use in the ceremony that brought the unconditional surrender of Germany. Gen. Walter Bedell Smith signed the 4th copy of the German surrender with one of those 51s, and he and Ike chose to give that pen to their close friend Marx! It, too, has a very unusual gold sleeve around the normal cap with its history engraved on it. The pen, itself, is an age-appropriate Vac-filler in Cedar Blue. Its Saks Fifth Avenue presentation box also has an engraved plate with the penâs history. This is the other pen Turner acquired and shared with me for this story. 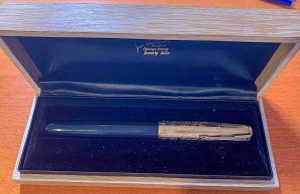 This Parker 51 was used in the signing of Germany’s unconditional surrender. It, too, was given to Louis Marx by Gen. Smith.

Smithâs own history continued to get more fascinating. After the war, he was promoted to the status of 4-star general. He also remained an Army general while serving as ambassador to the Soviet Union from 1946 into 1948. Smith continued on as a 4-star general while then also serving as head of the C.I.A. from 1950 into 1953! When Ike was elected president, Smith was chosen to be Under Secretary of State. He didnât keep that posting for very long, but he continued to help the Eisenhower administration.

Smith passed away from a major heart attack in 1961. His buddy Louis Marx, whose upstart toy company had grown into the biggest in the world by the 1950s, would live until 1982.Â 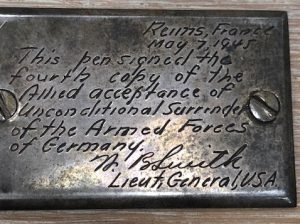 An engraved plate on the box of the Parker 51 used to help end WWII, describes the pen’s special place in history.

I certainly hope you find all of this history as interesting as I do. If anything, my jump down the rabbit hole of WWII pens has taught me is that I am far from finished uncovering the pens of WWII.Â

What pens did Neville Chamberlain and Adolf Hitler use to sign their ill-fated agreement? What pens did Franklin D. Roosevelt, Winston Churchill and Joseph Stalin use to sign their agreements at Yalta? What pens were used to ink the deal tying the U.S. to Chinaâs Chiang Kai-shek? What did Roosevelt sign the Lend Lease Act with? Clearly there are more famous pens in this war. I look forward to uncovering them with you in 2020 and beyond.