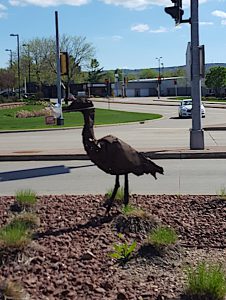 If statuary can wear a mask, so can you. This pandemic is still in its early stages, folks.

Hello. Let me introduce myself. I’m Pestilence, one of the Four Horsemen of the Apocalypse. Death, of course, is our leader. War is a bit of a blowhard but is always busy. Both Famine and I are background players but believe me, we do more than you can imagine.

I go back thousands of years. I like to say I put the Hit on the Hittites. Through the years I come and go. Back in the 14th Century was one of my triumphs…the Black Plague. I won a Golden Tombstone for that one (sort of like your Oscars). Got another for the great flu of 1918-19.

Through the centuries, I spread cholera, smallpox, typhus and so many more. I’m particularly proud of AIDS. But now, I’ve come up with Covid-19. I hate the name…it should be something catchier like the Black Death or The Spanish Influenza. Oh well, it’s an international triumph.

I want to give thanks to the Chinese communist government for covering up the disease long enough for it to spread…and even disciplining the doctor who tried to point it out. Also kudos to the American President who denied at least two months of warnings and then dismissed it as nothing to worry about because we had it well in hand.

People keep asking when will we get back to normal. Â My friends, this IS the new normal.