It isn’t uncommon for folks to write in asking what type of pen they have. I look at it as a fun challenge to i.d. the pen. Unless it is an old Victorian era pen, I usually do okay figuring out who made it. 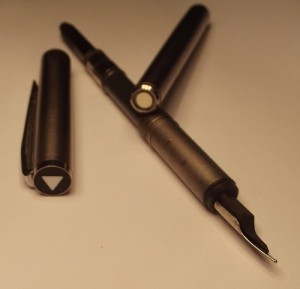 For a brief period in the 1970s, Mont Blanc changed its logo in the Saudi Arabian market to a white triangle, as seen in this photo of a Noblesse.

However, when Nigel wrote to me last October, we were both at a loss. He sent me a photo of a pen he had inherited. It looked like a Mont Blanc Noblesse. It said Mont Blanc on the pen. However, instead of a 6-pointed snowcap like the traditional Mont Blanc logo representing the mountain after which the company is named, his pen had a black field with a white triangle on the cap and a white circle on the tail.

Clearly, it wasn’t a Sheaffer. At first I thought it was a knockoff, but I didn’t think knockoff Mont Blancs were an issue in the 1970s. They didn’t instill their various trademarked hallmarks to verify authenticity until the 1990s. Plus, this looked like an authentic Noblesse from all of the other marks and design signatures of the pen.

It was time to do some serious sleuthing.

As it turns out, this is an authentic (and fairly rare) Mont Blanc. In a move that was embarrassingly insensitive, and particularly suspect for a German company then only 30 years removed from World War II, Mont Blanc altered their logo to appeal to a niche market. The company’s thought process went something like this: 1.) We want to break into the ballooning Saudi Arabian market and its rampant oil wealth. (Nothing wrong with that.) 2.) We want to be seen as the ultimate luxury writing brand. (They are brilliant marketers. Today they are instantly recognized all over the world as the authority in luxury writing instruments. Nothing wrong with that.) 3. Saudi Arabia and Israel are bitter enemies. 4.) Maybe our 6-point snowcap logo looks too much like a Star of David and will ruin our chances for cornering the Saudi market? (What?!) 5.) We will change our logo for the Saudi market. (Bad! Bad! Bad! I can’t imagine any multinational company today publicly announcing that they think a particular country is bigoted and then altering its products to satisfy that bigotry. Plus, it isn’t as if the world was so isolated in the 1970s that Saudis would never have known Mont Blanc’s logo was different every place else.)

It was a move that was seen as both derogatory toward Jews and the Saudis, and Mont Blanc stopped making the white triangle logos for the Saudi market after a couple years.

It should be noted that the modern Mont Blanc corporation has gone to great lengths to distance itself from its less savory past. It also is been bought and sold by new owners a couple of times since the 1970s. It was bought out by the British pen and luxury goods company Dunhill in 1977, and they were in turn bought by Richemont, who is presently the parent company for Mont Blanc, Dunhill and Cartier.