It only seems fitting that a pen company get the nation’s leading animator to sell it’s pens and pencils. Who wouldn’t trust Walt Disney when it comes to picking a new writing instrument?! 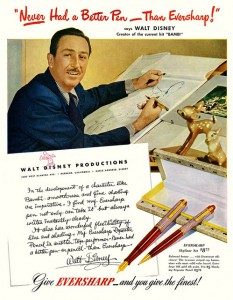 Walt Disney famously became a spokesperson for Wahl-Eversharp and its line of Skyline pens. The way Disney discusses the responsiveness of the nib, we figure he must have been given one of the famous and rare flex nibs Eversharp made.

Walt Disney famously pitched the futuristic looking Eversharp Skylines in the 1940s. This great ad comes from 1942 or early 1943, hot on the heels of the hit movie “Bambi.” It is difficult to think that anybody today doesn’t know this film about a young orphaned deer growing up in the woods with his friends Thumper and Flower.

Likewise, it is difficult to believe many pen collectors aren’t familiar with the iconic art deco designed Eversharp Skylines. Made right here in Chicago, the Skyline also was supposed to be one of the first pens engineered to handle the altitude pressure changes of flight. It had a nifty breather tube leading from the section into the sac, unlike most lever fillers of the 1930s and ’40s. However, the Parker Vacumatic already added that feature in the early 1930s, and the 51 kept it. So the Skyline wasn’t the only pen equipped to handle something as exotic and romantic as commercial aviation. Even then, many frequent fliers would have been dubious of the consistency of mess-free flight claims. 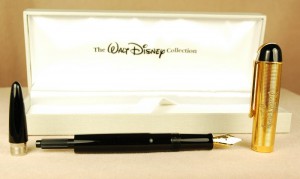 This is the first resurrection of the Eversharp Skyline made in a limited edition dedicated to Walt Disney.

Disney and Eversharp are so well linked in the public imagination that when the Eversharp brand was first resurrected in the late 1990s or early 2000s, a new Skyline was introduced in a limited edition collectors’ run. These pens switched from the original lever-filling design to a cartridge/converter system that was accessed by unscrewing a seemless blind cap in the tail of the pen. The Disney pens were numbered, and featured his autograph engraved on the golden cap.

ThePenMarket.com is excited offer one of these limited edition Disney Skylines on its preowned pens page. We also have a great collection of Eversharp Skylines in our vintage pens collection.