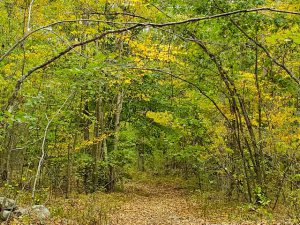 From here to eternity. Autumn closes in on Covid for Big Bad Ed.

Ed Brevington was a big man, a hard man, a tough and loud man.

He spent his days in backbreaking labor as a roofer. He spent his nights in bars, looking for anyone who would take him on. Few did and always to their regret.

Then came the pandemic and Ed proclaimed he wouldn’t be wearing a mask. “Hell,” he’d say, “If the President won’t wear one, why should I?”

And he would march maskless into stores, even those that said “No Mask, No Service. Few were bold enough to challenge him. He’d grab what he wanted and then throw money down on the counter and stalk out.

One day he woke with a headache…just a hangover he thought. But on the job, he started having trouble breathing. And his temperature shot up.

Reluctantly, he went to the hospital where he was immediately diagnosed with Covid and slapped into isolation. He spent four long weeks there and when they finally sent him home, he was as weak as a newborn lamb. Â Doctors told him to rest up and in a few weeks, he’d likely be back to normal.

A few weeks turned into a few months. He had no appetite and lost 50 of his 240 pounds. It was an effort to get out of bed to pee and shower. Then he’d need another nap.

Finally, he returned to the doctors who ran a series of tests on him. One proclaimed, “The virus not only damaged your lungs but your heart as well. You’ll never to able to return to hard labor but there are other, less strenuous things you could do…cashier, phone sales, greeter. You still could lead a full life.”

That life would last about six hours. He went home, collapsed for a nap and when he awoke, he walked up to his bedroom, removed a pistol from his bedside table and pressed it to his temple.

Ed Bevington…damned if he would wear a mask and damned because he didn’t.