From Zoom to Eternity
By Art Cerf 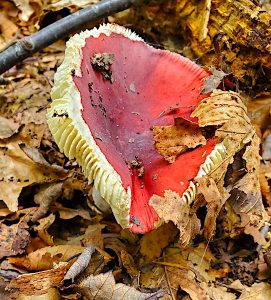 What type of mushroom is this? We found it growing in a Connecticut forest. It has nothing to do with the story. We just like catching your eye with pictures we like.

In olden days, Henry Prichard might have been a traveling engineer or linguist. But now, he was a much-in-demand computer wiz.

He fell in love twice while majoring in computer science at Purdue. First to a gal named Sally, whom he met in an introduction to programming course. And then with programming. Some people are born to be great singers or great doctors. Some easily take to French or another language. Henry took to Java, Python, JavaScript, C, C# and SQL.

He married Sally and had three children that he adored. But he was seldom home. Henry didn’t sell computer systems, he custom made Fortune-500 and governmental computer programs tailored to his client’s needs and was on call for people all around the world. So he’d travel from Denver to Dubai, come home for some fresh clothing, kiss the wife and hug the kids and then it was off to San Francisco and Singapore.

As you might imagine, Henry became very prosperous only his marriage was falling apart. Too many missed birthdays, anniversaries and the like. But the final straw was when he was called out of town on Christmas Eve to remedy some problem in Berlin.

Sally filed for divorce and took the kids with her to her hometown of Lebanon, Ohio.

Every night, Henry would Zoom them to catch up on their school days, their new friends and interests but he saw less and less of Sally who apparently was dating the manager of a local supermarket and who was home every night.

Then came the pandemic. No more traveling for Henry…not even to his office. But he was able to still work from his home and through Zoom, able to circle the world to fix problems remotely.

The trouble of course was calls came in 24 hours a day…each more urgent than the last. He took to sleeping on the couch to be available whenever needed. That often meant three hours sleep here, an hour there.

And there was the problem of his eating. He ordered out most nights and made one run a week, Sunday mornings, to the grocery to pick up lunch meat, snacks, desserts and Diet Coke.

From March to September, he gained 40 pounds and looked as pale as a ghost. No time or interest in exercising.

He heard from the office once a week but one week, no one answered their call. They tried again the next day and the next.

Nada. So finally, they sent someone out to see him and through the window, they saw him slumped over his computer. An ambulance was called, but it was at least two days too late.

Officially, the coroner’s report gave a heart attack as the cause of death. In truth, the pandemic had racked up another casualty.