Some days you just never know what you will find. Someone reached out to me with a collection for sale, and they told me the original owner was an avid Montblanc collector. Naturally, I was curious to see it. It didn’t take long to assess that this person had a huge collection of fakes. Sadly, they probably didn’t even know they had fake pens. Then again, maybe that was a good thing, as they were very happy with their collection until the day they passed.

This first batch of fake Mont Blanc pens has some really convincing models.

The fascinating thing to me was how some pens were extremely convincing, others were pretty obvious and some invented designs looked better than actual Montblanc pens! It was quite an education that I hope to share here.

In this first photo is a recreation of the Mont Blanc Writers’ Series William Faulkner. It (the bottom pen) looks very convincing…even better than the real thing, as the real pen’s color is a Spanish moss green-grey, and this knock-off pen is a cinnamon brown. The white pen behind it looks just like a Montblanc Tribute to Montblanc ballpoint. Only the real one has the exact same trim in a platinum plate not gold plate. Otherwise the serial number, Pix, small details were all identical. The red pen behind it looks just like some of the special edition MB pens that looked like the original safety fillers. However, the modern MB tribute pens were never made in red. I actually kinda like the red more than the official versions. The golden one in the back will look convincing to a novice, but on really close inspection the black cap bands were poorly painted on, and the black tail isn’t something an actual MB would have.

This second selection of false Montblanc pens shows is a little less convincing.

This second photo of fakes is also interesting. One of the things Montblanc does is make special or limited runs of slight alterations to its primary “Classique” design. Clever scammers can play on that variety by making their own unique version. Yet, with any experience with Montblanc pens and a little help from a search engine online will quickly reveal designs such as these four to be fake.

I don’t know the technical way to say this but the cap wring on the bottom pen is just worn wrong. The gold plating doesn’t wear like that on heavily used Montblancs. Plus, all of these pens have black bands around the cap bands when the pens are not black. Real Montblancs would have the black lines above show as the same color as the rest of the cap and/or remain gold. The bottom two pens might not show it in the photo, but their color and finish is far too cheaply made to be a real Montblanc. Also, not visible in the photo, some of the 6-point mountain top logos/stars are either rubbing off or poorly painted or unevenly inset into the caps. The black tails on two of the pens are another indicator they are fake.

These final pens stretch the boundaries of faking Montblanc. The closer pen looks like it could be a pen from the 1970s, but MB never had a model quite like that…and it didn’t fit Montblanc refills. The distant pen has the outline, shape and clip of a Montblanc, but it doesn’t have the logo. Maybe technically it isn’t a fake Montblanc, but in all other ways it tries to look like Mont Blanc.

I hope you’ve enjoyed this latest segment looking into the wonderful world of fake Montblanc pens. With any luck, it helps you avoid the pitfalls of the stunningly large market of counterfeit pens. 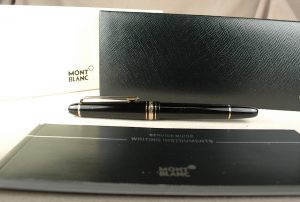 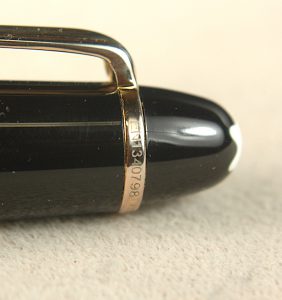 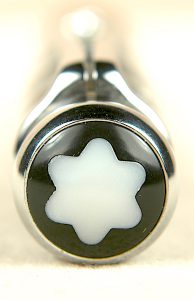 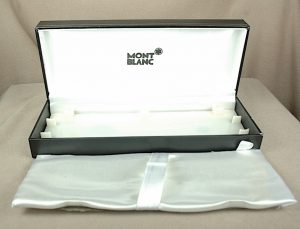