Some ads get so ridiculous we have to laugh. The advertising campaign for the Cross Verve is always good for a chuckle, but it sure didn’t seem to help sell any pens. It isn’t difficult to imagine the ads as pinups for teenage boys, but the sales for the Cross Verve were awful. I don’t think the pen lasted in production for more than a year or so. 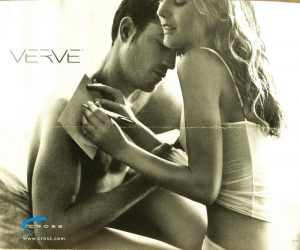 They say that sex sells, but sometimes too much sex distracts from the product. Cross Verve sales never seemed to rise to the occasion that this couple did.

The ad featured a hot young couple wrapped around each other in only their underwear, and the woman is trying to write a card using a Cross Verve ballpoint pen. The man is reaching under her cami to advance their foreplay.

The woman looks mildly perturbed that her letter-writing is being interrupted. I always like to image the caption of what she’s saying to him.

“Do you mind? I’m trying to write a postcard.”

“How am I supposed to wrap my supple thighs around you and write a letter, if you’re going to get all handsy every time?”

The Cross Verve was actually a good writing pen, even if it was a bit on the ugly ultra-modern side. Sadly, it didn’t seem that even a hot young couple in the mood could sell it…although people might have been a bit too distracted by the hot young couple to notice or care much about the pen.