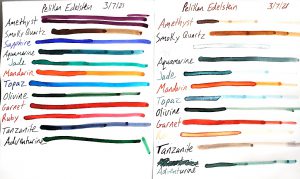 4 thoughts on “Pelikan Edelstein Inks Go Under the Sun”