With four moves in 2 years and a ton of other life changes, we were slow to test the new Lamy Crystal fountain pen inks to see how they would handle ultraviolet light and aging on paper. Luckily, we were able to start our three-month test this July. We actually let the test run about 3 and a half months.

To run our test, we used two sheets of Rhodia paper. Each of the 10 inks was first written on to the margin with a wet-writing glass dip nib. Then a swatch was drawn with a Q-tip with the intention of having a thick patch of ink and a thinned out portion so we could see the effects of UV light. One of the sheets was saved in a cool, dark, dry place. The other sheet Â was posted in the sunniest window of our office. The inks tested were called: Obsidian, Azurite, Ruby, Topaz, Amazonite, Beryl, Benitoite, Agate, Peridot and Rhodonite.

For nearly 3 and a half months, we tested the left sheet of paper with 10 Lamy Crystal inks in the direct sunlight to see how much they would or wouldn’t fade.

Here are the results. If you click the photo, you will see a larger version of the photo. It is surprising how much some of the inks change and others do not change.

To the relief of many, the Lamy Crystal Obsidian black ink holds fast. It only fades a little, unlike a suprising number of black inks. Yet, the purplish blue “Azurite” fades heavily to a reddish color that looks like if you dipped your finger in merlot and wiped it on a piece of paper.

Ruby and Topaz both held their red and sepia-brown colors very well during their time in the sun.

Peridot landed right in the middle. If the green was laid down thickly, it held. If it was thin, it faded.

Benitoite might also have a middle grade for its time in the sun. It was the only color that got darker! Benitoite is a blue-black. It lost most of its blue in the transition, but its black got stronger.

Amazonite is an odd color change. To me, it is one of the two most beautiful colors when laid down fresh. It is a very vibrant green-blue. And when set thickly on the page, it remains dark after time in the sun. Yet, the odd part is that the green gets lost in the sun and a faded blue remains. Normally, blue is the color we’ve seen disappear.

Beryl is my other favorite color when fresh. It is a lovely purply pink. Yet, after 3 months of sunlight, it completely changed to a very faded red. Even the thick/dark parts of the ink faded to a red, which itself is a faded color though remained darker.

The two colors that faded the most were Agate and Rhodonite. Rhodonite starts a beautiful reddish-pink and faded to a barely visible pink. The Agate was a light grey that actually turned light brown also fading to nearly invisible.

Hopefully, this information helps you with your ink obsession. Happy writing! 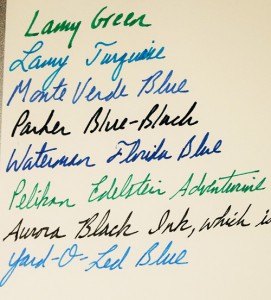 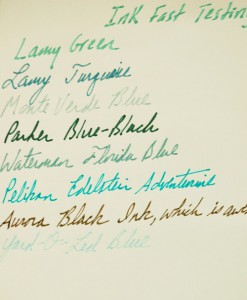 If you caught us at the Chicago Pen Show, then you saw our really fun Lamy nib-and-ink-testing station. It was a great opportunity to try each of Lamy’s 7 nib sizes used on their super-popular Safari, AL-Star and Studio pen models. Each of our pens was loaded with one of the 7 different ink colors Lamy sells in cartridges. 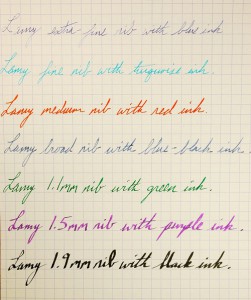 Check out the 7 standard nib sizes and ink colors put out by Lamy. These range from an extra-fine nib to a 1.9mm stub! Blue-black ink gives the best shadowing in a Lamy pen. These nibs can be ordered for any Lamy Safari, Lamy AL-Star and Lamy Studio fountain pen.

This sample shows the nibs ranging extra fine, fine, medium, broad, 1.1mm, 1.5mm and 1.9mm. I think our most popular seller was the 1.5mm nib followed by the medium nib. Extra fine is popular these days, but so many write with a bit of feedback. Personally, I love the medium, 1.1mm and 1.5mm nibs. The stubs offer nice line variation at a very affordable price. In a Lamy Safari, they make great travel pens that can get beat-up or lost without inducing guilt. Plus, with a fancy stub nib, your postcards and journal will look great.

The broad nib is actually much juicier than the image makes it look.

Our most popular inks were purple and turquoise. Purple was no surprise, given the popularity of the new dark lilac Safari. Turquoise did surprise me. Men bought it in droves, and they typically stick to standard blues and blacks. Yet, I’ve been thinking of using it much more than in years past. It’s a nice color.

For folks who like the stub nibs, I highly recommend the blue-black ink by Lamy. As you can see, it offers the most shading. The black is more solidly black without as much shading as a Parker Quink or Pelikan. Green is a great color that seems underused.

We are thinking of making the Lamy nib and ink stations standard for any show we can drive to. Hopefully, we will see you soon. In the meantime, I hope this photo serves as a good indicator as to the qualities of these Lamy nibs and inks.