“How do I collect pens for investment?” is probably one of the most difficult questions I have to answer. Like all the investment prospectuses out there state, “Investing requires a degree of risk with no guarantee of success.”

There are several strategies that can help an investor looking to profit on pens, but it is important to understand several key facts before investing.

â¢ The market for pens is constantly changing.
â¢ Cashing out for a profit can be difficult.
â¢ Even the most reputable retailers on earth don’t pay full retail for pens they are going to resell.
â¢ Like every good drug dealer knows: “Don’t get addicted to your own product.” 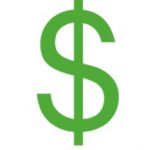 MINIMIZE SELLING COSTS: Most people love the collecting side of this wonderful hobby. They love the hunt, or they love using the pens. Yet, the first thing any investor-collector should think about is how they are going to offload their pens while getting their money out of them.

All of the major retailers online, such as myself, are looking for deals like any investor. If you have a rare pen that sells for $2,000, retailers like me aren’t going to pay you $2,000 for it, just so we can turn around and sell it for $2,000. Clearly, that is all risk and no reward for the retailer. And unless you found this pen for $50, you might be really upset if the retailer only offers you $1,500 or less for a $2,000 pen.

Auction sites and payment-receiving companies such as PayPal and Square charge any number of fees and commissions. These can quickly add up and dig into a substantial part of your profits.

Your best bet might be to sell your pens one-on-one at pen shows, in free social media listing pages or some place such as our Trading Post. We charge a one-time $5 fee for a single posting. You keep your pen and handle the transaction as you see fit. There are no other fees or commissions when you sell the pen. Just tell us it is sold, and we’ll delist it.

RESEARCH, RESEARCH, RESEARCH: If you are serious about investing in pens, knowledge is power. There are huge differences between why one pen might get an astronomical amount of money and why another pen that looks nearly identical wouldn’t. There are so many nuances that affect values. Plus, if you like modern pens…and even some vintage ones…you need to learn how to spot the fakes. Furthermore, it is critical to also research the trends in what is selling and at what prices it is selling. 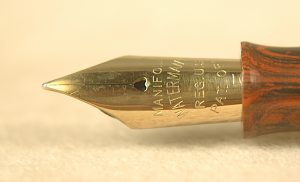 Flexible vintage Waterman nibs such as these from the 1920s are in exceptionally high demand in 2018.

DAY TRADING: Okay. The market for pens doesn’t move nearly as fast as it does for “day traders” on Wall Street. However, if you know what is really hot on the market right now and know you can quickly find a customer who will pay full price for it, you can make a lot of money. The trick is to know the market really well and not hold on to the pen for too long.

For example: As of this writing in November 2018, really flexible Waterman nibs from the 1920s are in peak demand. Everybody wants a flexi nib! So if you can find a Waterman 52 with a “wet noodle nib” in an antique store or flea market for $25, fix it up and sell it in a few days for $150 to $200, you’ll have made a great investment.

The trouble is that what is popular can seemingly shift overnight. About 10 years ago, everybody had to have an impossibly extra-fine nib on their vintage pens. If the line was so fine that you couldn’t even see it, that was perfect. Modern Japanese nibs can get that fine, but most vintage nibs were made for fine to medium writing. Thus those vintage extra-fine nibs were hard to find. Then one day I showed up at a pen show loaded with extra fines and nobody wanted them. The fad was over.

THE LONG GAME: Most people want a blue-chip stock they can buy at age 30, hold for 30 years and cash out at 60 for a tidy profit. They exist, of course, but they are less obvious than most people might assume. Take a Montblanc 149 fountain pen. They retail brand new for around $1,000. People who aren’t into pens might assume it will only hold that price and appreciate with time…but it won’t. Gently used 149s from the 1970s through ’90s are retailing for around $400 to $450. However, if you bought it in 1979 for $150…you’re doing okay. Yet, given how little has changed about them during the past 40 years, it isn’t likely you’ll make a profit on a new one sold from an MB boutique today. Nevertheless, an early 1950s’ 149 is resurgent on the market and attracting serious money that isn’t likely to subside for some time. 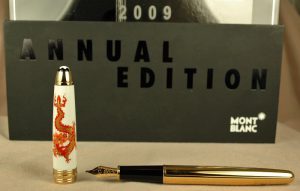 Hand-painted Montblanc Mythical Creatures series pens are genuinely rare pens that might appreciate in value, as they only made 1,500 of each…unlike the Writers’ Series pens which are made by the 10s of thousands.

A lot of people invest heavily in “limited edition” pens, but I am beginning to question how long those prices will last. With the exception of the Montblanc Writers’ Series Hemingway, Poe and Agatha Christie, most of those pens aren’t holding their original retail value. The trouble is that they aren’t really limited. MB makes tens of thousands of them every year. Everybody who wants one gets one. Most people treat them gently or don’t use them at all. There will come a time in the next 10 to 20 years when everybody either starts selling them off to cash in or passing them down to their children who don’t want them and sell them. When that happens, there will be a glut on the market. Frankly, I’m already seeing signs of that now.

Yet, maybe genuinely limited pens of say 1,500 or fewer, like the hand-painted Montblanc Mythical Creatures series, will appreciate more because so few were made…and they were more handmade than the more common pens. (Although even these pens are a little down in price at the moment.) 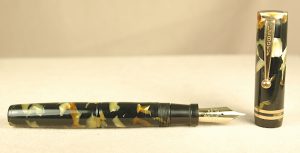 LeBoeuf #8 fountain pens are among the rarest grail pens for vintage pen collectors. These were among the first celluloid pens ever made…and are stunningly beautiful.

Vintage pens are a different matter. Blue chips might include an oversized #8 LeBoeuf, senior-sized mandarin yellow Parker Duofolds, Nassau green Parker 51s with double jewels and vermillion Sheaffer Snorkels. Each is a rare color variant on a popular pen. Prices might fluctuate over time, but their values ought to hold.

Playing Devil’s advocate to myself, nearly impossible to find grail pens spanning 1900 to 1925ish are once again becoming much more available as the original collectors are beginning to pass on. Younger, newer collectors are not as familiar with those pens and likely haven’t the money at this stage in their careers to purchase them…and so those prices are actually crashing a bit. It is unclear at the moment if new generation collectors will ever have much interest in the earliest fountain pens. Speculators might be wise to let the prices keep coming down and snatch a few up at “bargain” prices to hold for another 20 years or so. BUT, there’s no guarantee it will pay off.

Younger collectors were laughing at me the 2018 Ohio Pen Show when I said they should hold on to their TWSBI Ecos. These are $15 pens that are a scorching hot fad in affordable fountain pens. But who is to say that these new pen users and collectors in their early 20s and early 30s won’t get nostalgic for them in another 30 years, when they start looking back on how they got into pen collecting. Who knew those 1970s and ’80s Star Wars action figures and spaceships I played with all the time would now be worth a fortune? If only I hadn’t sold them all in a garage sale at age 12.

In closing, you can make a lot of money by investing in pens if you carefully research what it is you are investing in, know well the market and trends in collecting, buy low and sell high and have an inexpensive way to sell your investments. Good luck!