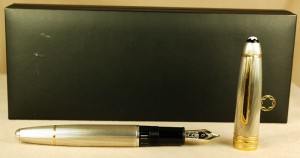 In the next several days we will be taking down Yard-O-Led from our “New” pens pages. It is a shame, as we never fully explored them as we had hoped. There was just too much going on to post all of the available models.

Recently, we learned our distributor would no longer carry the brand. Until we find out who the new distributor is, we are down to our last pencil and ink bottles. 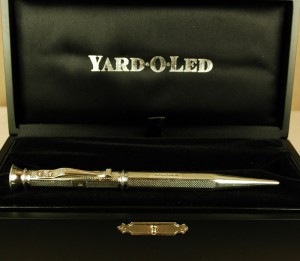 This is our last Yard-O-Led writing instrument for sale. It is the Regent pencil. Our supplier is no longer carrying Yard-O-Led pens, and we don’t know when we’ll get more.

We are out of the Astorias listed on the New Pens pages, but we still have a classically handsome sterling silver Regent pencil. It is available on our “Preowned” pens page, but it is completely brand new with its warranty, box and polishing cloth. It is a remarkable pencil whose design dates back to Victorian England. The various imprints on the pencil are hallmarks of purity authorized by the crown.

In addition to the Yard-O-Led Regent, we have several remaining bottles of ink still for sale.

Once these items have sold, they will be gone for a very long time. Get ’em while you can.

We’ve done it! ThePenMarket.com is now a fully licensed and authorized dealer of Lamy and Yard-O-Led writing instruments!

When we first launched this business, we figured we’d have a complete assortment of every brand-new modern pen available on the market within 6 months. We also didn’t know jack about anything. Yet, after 7 years of hard but fun work, we are proud to finally deliver on that promise of new pens. 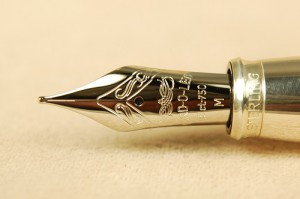 This is the incredible 18k white gold nib from the Yard-O-Led Astoria. It is one of many great NEW pens you will find on our New Pens pages, now that we are an authorized dealer for Lamy and Yard-O-Led.

If you wonder why we have been so quiet on the blog for the past several months, this is why. We were just way too busy working behind the scenes getting the new pens ready with help from our wonderful friends at Computer Friendly Associates.

Enough, with the small talk, come take a tour of the New Pens section with us. Click that New Pens link in the last sentence. It should open up a new tab showcasing the new section.

To go exploring just click whichever brand you prefer: Lamy or Yard-O-Led. This will show you all of the models presently available for sale. If you clicked Lamy, you will see the Safari and the Al-Star! We will be adding more soon, but we wanted to open this to you now so you can play around in it to see what you think and to get your feedback.

Let’s say you are interested in the Safari. Below the main image you will see tabs for the different styles the Safari comes in: Fountain Pen, Rollerball, Ballpoint and Pencil.

Click the Fountain Pen, and you will see all of the colors and nib options available. Unlike any other dealership, we gladly offer 11 different style Lamy nibs that fit the Safari–including the calligraphy 1.1mm through 1.9mm nibs normally reserved for the “Joy” pen by Lamy!

Why Lamy and Yard-O-Led?

Lamy is a fantastic brand that makes really good, really affordable fountain pens for any skill-level of fountain pen user. Their terrific German engineering makes them durable for any adventure you go on, and their nibs are so smooth and reliable.

Yard-O-Led is a writing instrument company in England that specializes in luxury pens not frequently found here in the United States. Their pens and pencils are made of sterling silver and are true works of art. They are damn good writers, too. I think if American pen users were more familiar with them, they would switch their allegiances from Mont Blanc to Yard-O-Led in a hurry.

Well, have fun exploring the new section of the site, and rest assured more pens are coming! In the meantime, please let us know what you think about the new section and how it works for you.